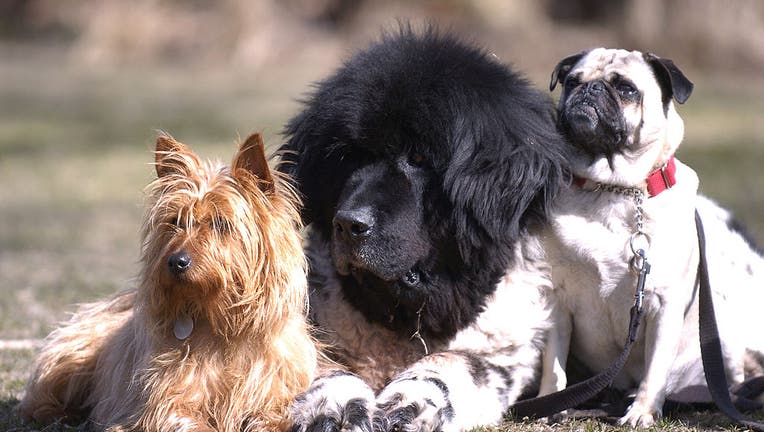 FILE - Doggie boot camp is held in the park at Kew Gardens on the beach. L to R: Australian terrier, Newfoundland, pug.

NEW YORK - Early in May, Nydia Bonefont was concerned when her dog wouldn’t eat and seemed lethargic. She realized that Papi, a 9-year-old Beagle/Cavalier mix, must have hurt himself — he cried when he was touched. But she was without income to pay for vet care.

“I lost my job a while ago, and then the pandemic started,” she says. “I went in March to see the doctor for very bad bronchitis and asthma, and he said that I have to stay home because I was high-risk.”

Fortunately, the American Society for the Prevention of Cruelty to Animals has a clinic in her Brooklyn, New York, neighborhood where she had taken Papi before. She got him some pain medication and free dog food there, and after a few days he was his old self again, running and playing with her son.

Many pet owners are finding themselves in financial straits during the pandemic. At the same time, there’s a growing recognition among animal welfare organizations that to help animals, they need to help struggling pet owners.

“Increasing access to health care and critical resources for pets that are living in poverty is the best way to keep pets out of the shelter,″ says Matt Bershadker, president and CEO of the ASPCA. ``If we can provide those services, we can keep animals in a home where they’re bonded and loved.”

Since it was launched in March, the ASPCA’s $5 million COVID-19 Relief & Recovery Initiative has provided $2 million in grant funding, set up new pet-food distribution centers in cities including Los Angeles, Miami, New York and Asheville, N.C., and helped more than 268,000 dogs, cats and horses nationwide, including distributing about 1,800 tons of food.

“In response to COVID, we put a lot of this work into hyperdrive,” says Bershadker. “We made grants to about 50 organizations across 30 states to support them as they navigate the crisis.”

Executive Director Dr. Susan Miller says the price of care is a common reason people give when surrendering their pets to shelters and rescues.

“They can’t afford it, so they think their only option is to surrender,” she says. “I believe that everyone is entitled to the relationship you can have with a pet, no matter what your finances, because I so strongly believe in what pets bring to our quality of life and our humanity.”

Mission opened up their subsidized price program to anyone in need due to the pandemic.

“We’re seeing about 200-250 more pets per month due to COVID-related issues — so that would be 10-15 percent more pets per month,” she says. “And that number’s only been getting larger month after month for the past four months.”

“We never had that before as a resource for our clients, but now we know we really need it,” Miller says. “We had a thousand pounds of food delivered a few days ago and it was gone in a little over two days.”

Bershadker notes that so far most shelters are not seeing an increase in surrendered pets. While they’re tracking this carefully – the potential for an eviction crisis is of particular concern – it’s not a surprise to him that even when people have to cut back, caring for their pets is a priority.

“We see people go to extraordinary lengths to keep and care for their pets,” he says. “I think that speaks to the power of the human-animal bond. They are part of the family.”

Bonefort agrees. “I don’t even use that word, ‘give him up.’ I don’t even want to put that phrase in my mouth,” she says. “He’s adorable, he’s my baby, he’s my companion. I love him so much.”