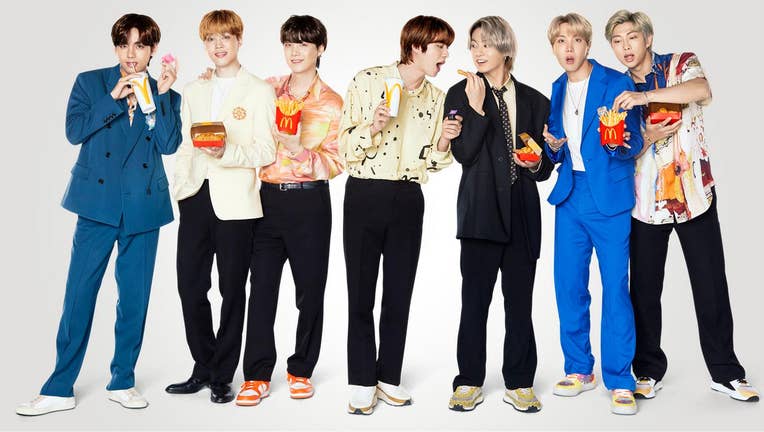 Although the BTS Meal doesn’t come with a dessert, McDonald’s found a way to sweeten the arrival of the deal. (Source: McDonald’s)

It was a big day for K-Pop fans who also love Mickey D's. But it was also a big bust for a lot of them, too.

But judging by the volume of fans on social media expressing their frustration, the big offer didn't go as planned for everyone.

Many people on Twitter complained that their McDonald's location either didn't have the BTS Meals at all or sold them the meals but without the correct BTS-labeled bags or containers.

Some fans tweeted that they had to "DIY" the packaging, and included an image showing "BTS Meal" and other lettering hand-written on the containers.

Another wrote, "I only got the purple bag but what about the cups??"

A user with the handle @BTS_Jenn_ (who describes herself as "36, mom, wife, BTS ARMY!!!") posted side-by-side pix of the way the meal is supposed to look and what she claims she got (spoiler alert: they were… different.)

Meanwhile, user @Floral_Hoseok_ tweeted a photo of their meal, showing only BTS-themed sauce packets but no cup, and nothing else.

(It seems the lack of purple cups was a particular point of pain.)

Many, many, many other social posts contained language we are unable to reprint here.

The shortage of BTS supply isn't that surprising given how popular K-Pop souvenirs are on the secondary market but did fans really buy up all of it so quickly?

McDonald's and BTS were expected to make out big time on this tie-in. The chain is giving fans a chance to buy limited-edition merchandise inspired by the BTS Meal — exclusive hoodie, bathrobe, socks, sandals and shirt — through the Weverse Shop app.