ELIZABETH CITY, N.C. - Attorneys for the family of Andrew Brown Jr., a Black man shot and killed last week in North Carolina by sheriff’s deputies serving warrants, said Monday that Brown’s hands were on the steering wheel before he was shot in the "back of the head."

"So they were shooting at him with his hands on the steering wheel in the driveway," family attorney Chantel Cherry-Lassiter told reporters during a news conference Monday in Elizabeth City, North Carolina.

Relatives gathered Monday afternoon with their attorneys after meeting with investigators in Pasquotank County and watching body camera footage.

Attorney Ben Crump said investigators only showed 20 seconds of video from one body camera and said he believes there is more footage from other body cameras.  Investigators showed the video to Brown’s family after mounting pressure from relatives, their attorneys, local leaders and the public.

"We do not feel that we got transparency," Crump told reporters during a news conference. "We only saw a snippet of the video."

"The truth will come out. The video will be seen by the public and we will get justice for Andrew Brown, Jr.," Crump said, calling on authorities to release more footage from all cameras that rolled that day.

"It’s like we’re against all odds in this world," Brown’s son Khalil Ferebee said. "My dad got executed just by trying to save his own life. The officers were not in no harm of him at all. It’s just messed up how this happened."

Brown, a 42-year-old from Elizabeth City, was shot to death Wednesday by one or more deputy sheriffs trying to serve drug-related search and arrest warrants, authorities said. An eyewitness said Brown tried to drive away but was shot dead in his car.

Cherry-Lassiter said she took notes while watching the 20 seconds of police video footage. She said she saw at least five deputies directly pointing their weapons at Brown yelling at him to show his hands, despite Brown’s hands being on the steering wheel. She said she then heard multiple gunshots, but was unsure how many officers fired their weapons.

RELATED: Derek Chauvin to be sentenced on June 16

Elizabeth City declared a state of emergency Monday morning ahead of the possible public release of the body camera footage, WAVY-TV reported.

The family had been scheduled to see the footage at 11:30 a.m. ET, but the viewing was delayed after law enforcement said redactions were needed on the video, such as blurred faces, according to the news station. 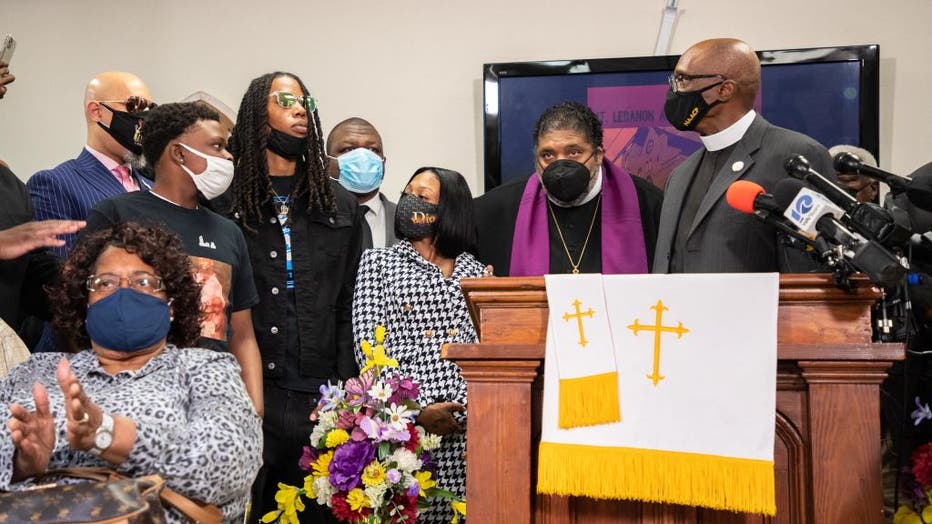 Reverend T. Anthony Spearman, president of the North Carolina NAACP, addresses the media with the family of Andrew Brown Jr. during a press conference at The Mt. Lebanon A.M.E Church calling for the release of body cam footage in Elizabeth City, Nort

Over the weekend, Pasquotank County Sheriff Tommy Wooten II said he would ask a judge as early as Monday to release the video to the public as soon as he's confident it won't compromise an investigation into the shooting.

Wooten added that he would first check with the State Bureau of Investigation, which is looking into the shooting, to make sure that releasing the video would not hamper their efforts.

"Only a judge can release the video. That's why I've asked the North Carolina State Bureau of Investigation to confirm for me that the releasing of the video will not undermine their investigation. Once I get that confirmation, our county will file a motion in court, hopefully Monday, to have the footage released," Wooten said.

"America, here is the issue: a warrant is not a license to kill, even if a suspect supposedly drives away," Barber said at the news conference attended by several of Brown's children and other family members.

"A warrant is not permission to shoot someone," he added.

According to court documents released Monday, the search warrant being served when deputies shot and killed Brown says that investigators used information from an informant, including recordings of drug buys.

The search warrant has been cited as the reason that deputies came to Brown’s house. Wooten has said that deputies shot and killed Brown while serving drug-related search and arrest warrants but released few other details. An eyewitness account and emergency scanner traffic indicate that Brown was driving away and may have been shot in the back. Seven deputies have since been placed on leave.

The warrant obtained by the Pasquotank County sheriff’s office and signed by a local judge said that an investigator in nearby Dare County was told by the informant that the person had been purchasing crack cocaine and other drugs for over a year from Brown, according to the Associated Press. The warrant said that in March, local narcotics officers used the informant to conduct controlled purchases of methamphetamine and cocaine on two separate occasions. The warrant says both buys were recorded.

Previously disclosed arrest warrants from Dare County included charges of possession with intent to sell and deliver cocaine and methamphetamine against Brown.

The shooting has prompted days of protests and demands for accountability in the eastern North Carolina city of about 18,000.