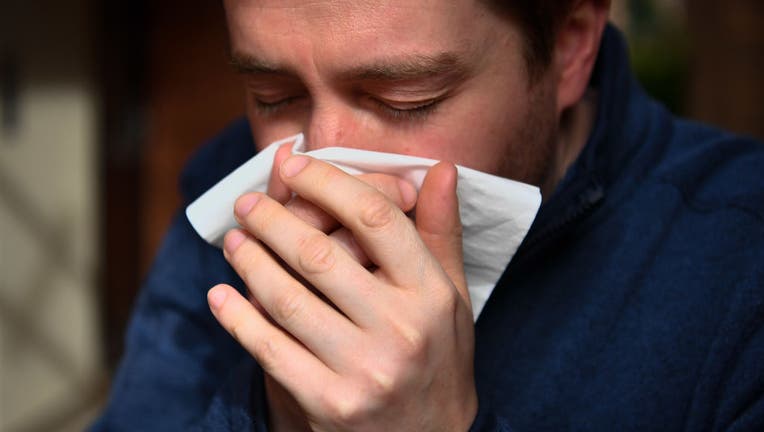 FILE - A man sneezes into a tissue. Photo by Ben Birchall/PA Images via Getty Images

Island Abbey Foods said Friday sales of its Honibe cough and cold lozenges have declined in the first two quarters of 2021, forcing the Charlottetown company to cut 30 temporary positions from its production operation.

Measures aimed at curbing the pandemic such as masks, frequent hand washing, physical distancing and working from home appear to have also lessened the prevalence of seasonal viruses.

The apparent drop in winter colds across the country seems to have weakened demand for medicine and natural remedies aimed at soothing sore throats and nasal congestion.

Both Metro Inc., which operates drugstores primarily under the Jean Coutu, Brunet, Metro Pharmacy and Drug Basics banners, and Loblaw Companies Ltd., which has a network of Shoppers Drug Mart and Pharmaprix outlets, have noted the weak cough and cold season.

Metro president and CEO Eric La Fleche told analysts during a conference call in November that it appeared to be a "much weaker cold and flu season," as the increase in sanitary measures due to COVID-19 appear to help curb the spread of seasonal viruses.

Loblaw president Sarah Davis also noted during a call with investors in November that the company was looking at ways to offset a declining trend in the cough and cold sector.

For Island Abbey Foods, the decline comes on the heels of a "tremendous year" in 2020, said Scott Spencer, president and chief operating officer.

"We increased headcount significantly across our company to meet higher than anticipated demand and position our company for success," he said in a statement.

The Charlottetown company has continuously adapted to the ever-changing business realities that COVID-19 is imposing on the world, he said.

But despite substantial gains with its digital retail strategy, Spencer said online sales have not replaced the volume the company projected for a regular cold and cough season.

The company said demand for its gummy products continues to be strong. It said planning is underway for a major expansion project, which includes state of the art equipment that will increase capacity to meet growing demand.

This report by The Canadian Press was first published Jan. 22, 2021.