Alex Trebek passes away at 80 after cancer battle

Alex Trebek, the longtime host of the game show Jeopardy has passed away at the age of 80.

Alex Trebek spent his final day doing exactly what he wanted to: watching the horizon with his wife.

Trebek died on Nov. 8 after a lengthy battle with stage 4 pancreatic cancer. The longtime “Jeopardy!” host not only kept fans updated on his health battle every step of the way, but he continued to do his job hosting the popular trivia show as well.

Speaking on the “Today Show,” the game show's executive producer Mike Richards shared some insight into how the 80-year-old television icon spent his last day on Earth.

“Even in his book, he described that he wanted his final day to be sitting on his swing next to his wife, Jean, and kind of watching the horizon and he got to do that,” Richards said in an excerpt from his interview shared on the show’s Twitter.

He said that Trebek had always been particularly fond of the swing on his property and even fixed it himself earlier this year. Richards noted that the host was very “handy.”

“He was coherent, he wasn’t in pain and the fact that he had a nice, final day makes all of us in the ‘Jeopardy!’ family feel much better,” he concluded.

In a separate clip, the hosts played an old video in which Trebek broke the tension on set during a "Jeopardy!" game that featured record winner, Ken Jennings, by coming out without pants. 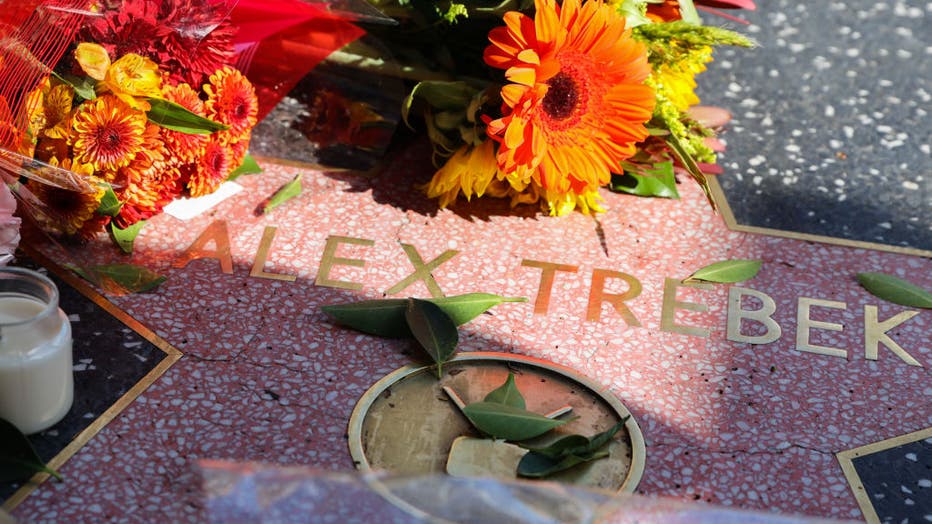 Flowers are seen on Alex Trebek's star on the Hollywood Walk of Fame on Nov. 08, 2020, in Hollywood, California. (Photo by Rich Fury/Getty Images)

“He wanted the contestants to perform at their highest level and he reveled in a great ‘Jeopardy!’ game when it was competitive. Those are some of our best contestants of all time there. There was an enormous amount of tension on the set. They all knew there was a lot on them to perform and that just goes to show that he had an incredible sense of humor but also how important it was to have a great’ ‘Jeopardy!’ game. He loved that. He’d get to the end of the show and say ‘boy, wasn’t that great?’ and he’d look right at the contestants and say ‘thank you,’” Richards said. “And that just sums him up.”

He concluded: “It was just so important for him to do this show and to support everything that it means to America.”

His words echo sentiments that he shared in a statement from the show provided to Fox News shortly after Trebek’s death.

“This is an enormous loss for the 'Jeopardy!' staff, crew and all of Alex’s millions of fans. He was a legend of the industry that we were all lucky to watch night after night for 37 years. Working beside him for the past year and a half as he heroically continued to host 'Jeopardy!' was an incredible honor. His belief in the importance of the show and his willingness to push himself to perform at the highest level was the most inspiring demonstration of courage I have ever seen. His constant desire to learn, his kindness, and his professionalism will be with all of us forever,” Richard said.