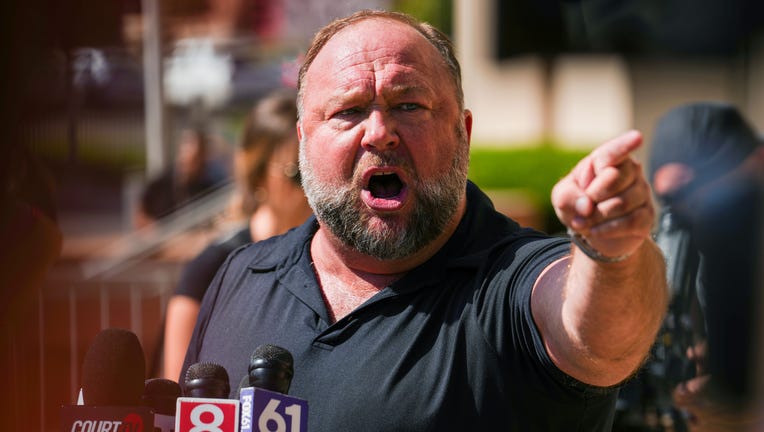 InfoWars founder Alex Jones speaks to the media outside Waterbury Superior Court during his trial on September 21, 2022 in Waterbury, Connecticut. (Photo by Joe Buglewicz/Getty Images)

Conspiracy theorist Alex Jones and his company were ordered Thursday to pay an extra $473 million to victims' families and an FBI agent for calling the 2012 Sandy Hook school shooting a hoax, adding to a nearly $1 billion jury verdict issued last month.

Eight victims' relatives and the FBI agent testified during a month-long trial about being threatened and harassed for years by people who deny the shooting happened. Strangers showed up at some of their homes and confronted some of them in public. People hurled abusive comments at them on social media and in emails. And some received death and rape threats.

The conspiracy theorist Alex Jones should pay $965 million to people who suffered from his false claim that the Sandy Hook Elementary School shooting was a hoax, a jury in Connecticut decided. Jones says he will appeal the decision.

Jones has bashed the trial as unfair and an assault on free speech rights. He says he will appeal the verdicts. He also says he doesn't have the money to pay such huge verdicts, because he has less than $2 million to his name — which contradicted testimony at a similar trial in Texas. Free Speech Systems, meanwhile, is seeking bankruptcy protection.

Bellis found Jones and Infowars' parent company liable for damages without a trial last year, as a consequence for what she called his repeated failures to turn over many financial documents and other records to the plaintiffs. After the unusual "default" ruling, the jury was tasked only with deciding on the amount of compensatory damages and whether punitive damages were warranted.

Jones says he turned over thousands of documents and the default ruling deprived him of his right to present a defense against the lawsuit.

In Connecticut, punitive damages for defamation and infliction of emotional distress are generally limited to plaintiffs' legal fees. The Sandy Hook plaintiffs' lawyers are to get one-third of the $965 million in compensatory damages under a retainer agreement — putting their legal fees at $322 million. 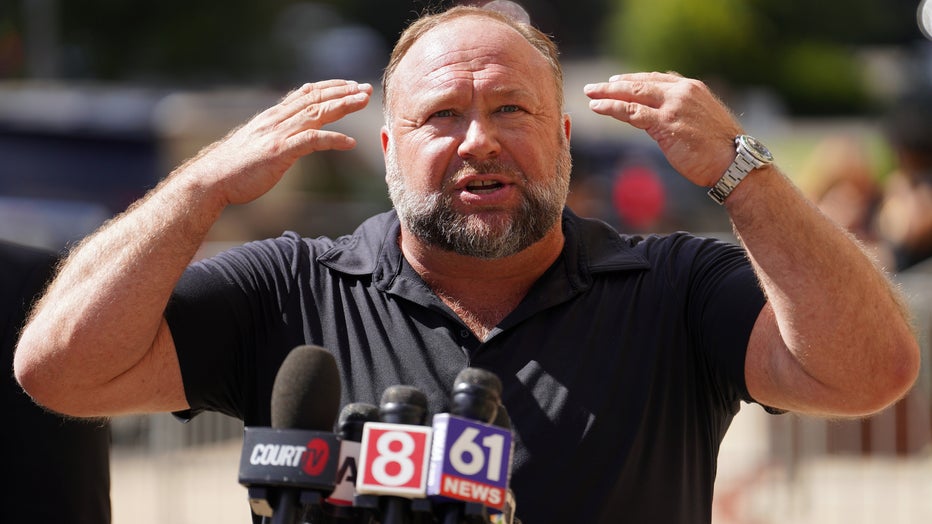 InfoWars founder Alex Jones speaks to the media outside Waterbury Superior Court during his trial on September 21, 2022 in Waterbury, Connecticut. (Photo by Joe Buglewicz/Getty Images)

But there is no cap on punitive damages for violations of the Unfair Trade Practices Act. The plaintiffs had not asked for a specific amount of punitive damages, but under one hypothetical calculation they said such damages could be around $2.75 trillion under the unfair trade law.

In a similar trial in Texas in August, Jones was ordered to pay nearly $50 million to the parents of another child killed in the Sandy Hook shooting for calling the massacre a hoax. A forensic economist testified during that trial that Jones and Free Speech Systems have a combined net worth as high as $270 million.

A third and final trial over Jones' hoax claims is expected to begin around the end of the year in Texas. As in Connecticut, Jones was found liable for damages without trials in both Texas cases because he failed to turned over many records to the plaintiffs.