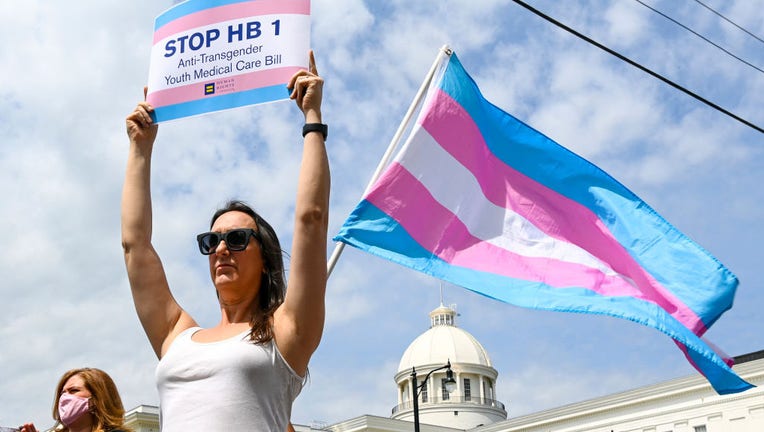 Sydney Duncan holds a sign during a rally at the Alabama State House to draw attention to anti-transgender legislation introduced in Alabama on March 30, 2021 in Montgomery, Alabama. (Photo by Julie Bennett/Getty Images)

MONTGOMERY, Ala. - A new state law that took effect Sunday in Alabama makes it a felony, punishable by up to 10 years in prison, for doctors to prescribe puberty blockers and hormones to trans people under age 19.

Trans youth and parents have said The Vulnerable Child Compassion and Protection Act bans what they consider necessary, and sometimes life-saving care for them.

Four Alabama families with transgender children have filed a lawsuit challenging the law as unconstitutional. The U.S. Department of Justice has joined the suit.

A federal judge heard evidence this week on a request to block the state from enforcing the statute while the legal challenge goes forward. More than 20 medical and mental health organizations, including the American Academy of Pediatrics, have also urged the judge to block the law.

A decision is expected sometime this week.

Alabama maintains the law is about protecting children. "The science and common sense are on Alabama’s side. We will win this fight to protect our children," Alabama Attorney General Steve Marshall said last week.

Now that the law is in effect, families are wondering if they will have to move out of state and doctors are worried about what will become of their patients.

"The law discriminates against transgender minors by unjustifiably denying them access to certain forms of medically necessary care," the complaint states. "As a result of S.B. 184, medical professionals, parents, and minors old enough to make their own medical decisions are forced to choose between forgoing medically necessary procedures and treatments or facing criminal prosecution."

The measure is part of a wave of legislation in Republican-controlled states focused on LGBTQ youth. Bills have been introduced to limit discussion of gender and sexual identity issues in younger grades or to prohibit kids from using school restrooms or playing on sports teams that don’t align with their sex at birth.

Alabama is among several states with Republican-controlled legislatures that have advanced bills regarding transgender youth and LGBTQ issues. The Alabama law is the furthest reaching and the first to criminalize the treatments.

Texas Gov. Greg Abbott had ordered the state’s child welfare agency to investigate as abuse reports of gender-confirming care for kids. Arkansas also banned gender-affirming medications, but that law has been blocked from taking effect.