LOS ANGELES -
Stay at home orders, thousands of flight cancellations, and an overall decline in global trade and commerce due to the COVID-19 pandemic may be having a positive impact on the environment.

This trend was first observed earlier in the year when the COVID-19 outbreak impacted residents in Wuhan, China. Quarantine protocols were put into place, such as businesses and transportation to and from the area being shut down, to help stop the virus’ spread.

Based on data and maps provided by NASA’s Earth Observatory, levels of nitrous dioxide, or NO2, decreased significantly in the Wuhan region from January through February. NASA noted how decreases in air pollutants are common during Lunar New Year celebrations, “where businesses and factories close from the last week in January into early February to celebrate the festival.”

U.S. states that have issued stay at home orders due to coronavirus

Across the country, states are combating the spread of the novel coronavirus by issuing orders for residents to stay at home.

But this year’s dropoff could be owed to less commercial activity and movement spurred by COVID-19 restrictions, considering that Wuhan’s NO2 levels were significantly lower than they were at the same point in 2019.

“I am not surprised because many cities nationwide have taken measures to minimize spread of the virus,” said Fei Liu, an air quality researcher at NASA’s Goddard Space Flight Center, when speaking on the drop in NO2 levels.

A similar pollution drop is now occurring in the United States, where commerce has slowed and residents in major metropolitan areas remain under stay-at-home orders. Descartes Labs, an analytics and predictions company, created visualizations of how N02 levels had dropped in certain areas across the United States, which could be attributed to less commercial activity and traffic due to the COVID-19 pandemic. 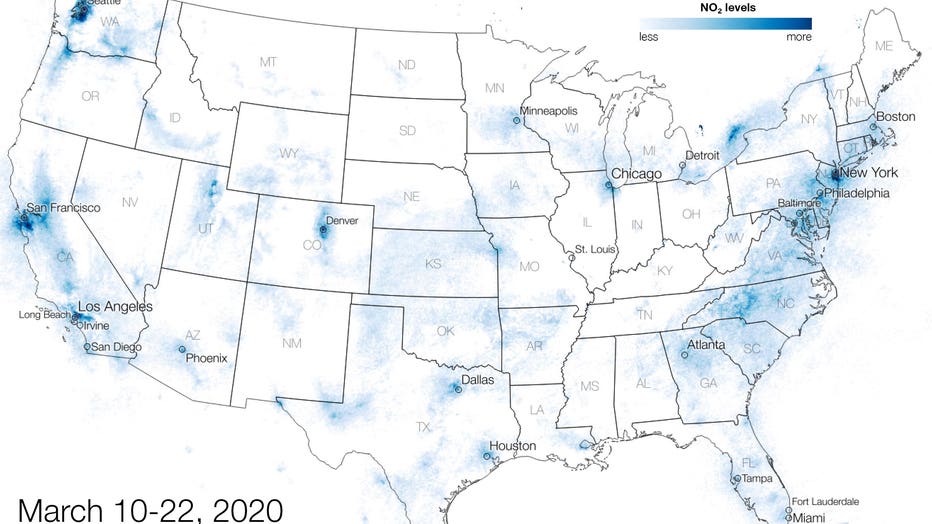 Similar drops were seen in carbon monoxide and dioxide gas levels as well. Citing data from Columbia University, the BBC noted how New York's carbon monoxide emissions dropped around 50% and carbon dioxide by 5-10%, as well as significant drop in methane. Carbon dioxide and methane are primary greenhouse gases, which contribute to the increased warming of the planet.

However, the positive trends in NO2, carbon monoxide, dioxide or methane levels could be reversed when global commerce, travel and transportation behaviors resume to their pre-pandemic levels.

The current pandemic has also impacted environmental activists as well, as April 2020 marks the 50th anniversary of Earth Day. Rather than holding marches, an "Earth Day Live" event will happen April 22-24 and will include speakers, voter registration, protests against financial institutions that support the fossil fuel industry, and entertainment. The event will be accessible on computers and mobile devices in the hopes that it will encourage engagement and action among people who are secluded at home and who may have planned to march in Washington and other places.

“It's a time to really rethink our strategy,” said Katie Eder, the 20-year-old executive director of the Future Coalition, one of nine youth-led organizations that are coordinating the event. “We are really looking at this as a way to reimagine what a social movement can look like in a digital age."

The first Earth Day, the brainchild of the late Sen. Gaylord Nelson of Wisconsin, happened in 1970 and sparked an environmental movement that led to the creation of the Environmental Protection Agency and many laws to protect water, air and wildlife.

While led by youth organizations, including the Sunrise Movement, Zero Hour and Amazon Watch, the event is intended to be intergenerational, with an eye on building on momentum from a massive global climate march in September.

Members of the groups said they are very much focused on the crisis at hand — the coronavirus — but they say climate change also will affect vulnerable populations the most.

“It's not just about the environment and the climate,” said 17-year-old Naina Agrawal-Hardin, of the Sunrise Movement. “It's also about building a society and an economy that's going to take care of the people who've been affected by this crisis, the people who are on the front lines of this crisis, whether that's through health care efforts or economic efforts.“