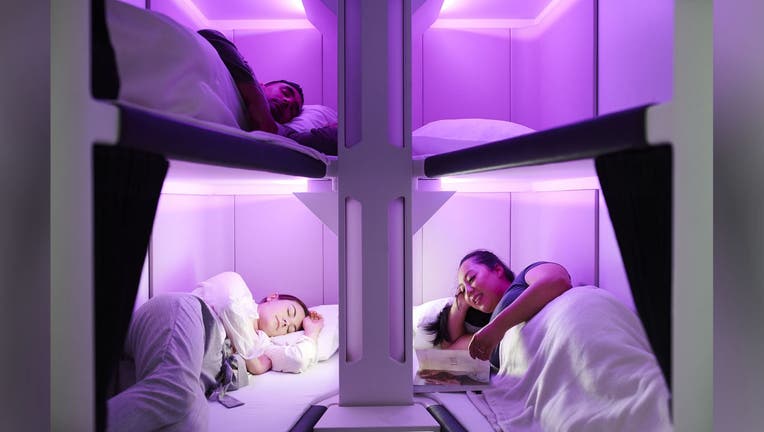 The best way to travel? Being cozy while you do it (Air New Zealand)

(FOX NEWS) -- The best way to travel is to be cozy while you do it.

Air New Zealand announced it was testing out installing sleeping pods in its economy cabins. The company says it spent three years researching and developing the concept, using the input of more than 200 customers.

The airline revealed the new concept in a press release sent to Fox News. Air New Zealand said the concept, which is being called Skynest, will be tested for a year on Auckland-New York operations, at which point the company will make a decision about its future.

“We have a tremendous amount of development work underway looking at product innovations we can bring across all cabins of the aircraft.  A clear pain point for economy travelers on long-haul flights is the inability to stretch out. The development of the Skynest is a direct response to that challenge,” said Air New Zealand Chief Marketing and Customer Officer Mike Tod.

Each bed area will include a full-size pillow, sheets, blanket, earplugs and a privacy curtain, along with lighting designed for sleeping.

General Manager of Customer Experience Nikki Goodman said, “We see a future flying experience where an economy-class customer on long-haul flights would be able to book the Economy Skynest in addition to their Economy seat, get some quality rest and arrive at their destination ready to go. This is a game-changer on so many levels.”

Kerry Reeves, the airline’s Head of Airline Programs, credited the concept to the company’s “can-do attitude.” He followed up by explaining, “The question is never ‘can we do this’ but instead ‘is it right to do this for our customers?’ and, if so, ‘how will we do this?’ Our ability to take a good idea, to execute and deliver an innovation that works in our environment, our market and for our people and customers gives us an edge.”