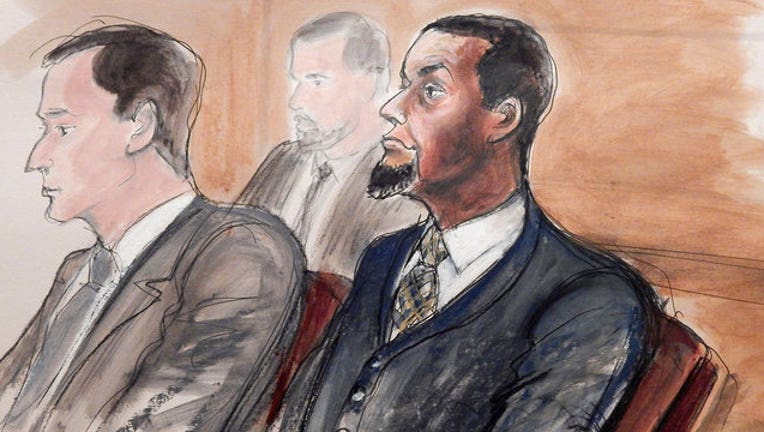 FILE - In this courtroom file sketch, Tairod Nathan Webster Pugh, right, sits at the defense table with his attorney Zachary S. Taylor, during jury selection in a federal court in the Brooklyn borough of New York. (Elizabeth Williams via AP, File)

NEW YORK (AP) - A U.S. Air Force veteran was properly convicted on terrorism charges for trying to join the Islamic State group and die a martyr, an appeals court said Thursday, but it ordered a judge to resentence him and better explain his reasons behind any penalty.

Tairod Pugh, 51, of Neptune, New Jersey, is serving a 35-year prison sentence, the maximum possible penalty he faced after a Brooklyn jury convicted him in 2016 of trying to provide material support to a terrorist organization and obstruction of justice.

It was the first verdict in more than 70 cases the U.S. brought against Americans suspected of supporting the militant group.

Prosecutors said Pugh, who was an airplane mechanic in the Air Force from 1986 to 1990, was seeking a route into Syria to join the Islamic State group in 2015 when he was stopped at a Turkish airport.

They said he had a laptop with information on Turkey-Syria border crossing points; 180 jihadist propaganda videos, including footage of an Islamic State prisoner beheading; and a letter declaring: "I will use the talents and skills given to me by Allah to establish and defend the Islamic States."

Trial evidence included a letter Pugh wrote to his wife saying, in part: "There is only two possible outcomes for me: Victory or martyr."

A three-judge panel of the 2nd Circuit in Manhattan said in a written ruling that the letter to his wife was properly allowed into evidence and that other challenges by defense lawyers to the trial provided no basis to overturn the verdict.

But it also said U.S. District Judge Nicholas G. Garaufis provided an inadequate explanation for why he imposed the maximum allowable sentence on the military veteran, who moved to the Middle East to work for aerospace companies after he left the military.

The appeals panel noted that most of the court's comments at sentencing related to Pugh's guilt rather than why the sentence he was announcing was appropriate.

"The present record does not permit meaningful appellate review of the substantive reasonableness of Pugh's sentence," the 2nd Circuit said.

At his 2017 sentencing, Pugh said he was innocent. During a lengthy rambling statement, Pugh was cut off by the judge as he started to cry and after he had spoken long enough to fill over 17 transcript pages.

"I can't listen to this whole thing. I just can't. ... I'm not the psychiatrist. I'm the judge, and I'm limited in what I can do," Garaufis said. He allowed Pugh time to refocus his remaining statements, but Pugh chose not to resume.

Creizman, his attorney, said Pugh was feeling small after losing his job when he started researching the rise of the Islamic State group in the summer of 2014, impressed that Muslims were trying to create a country and wouldn't "back down from anything."