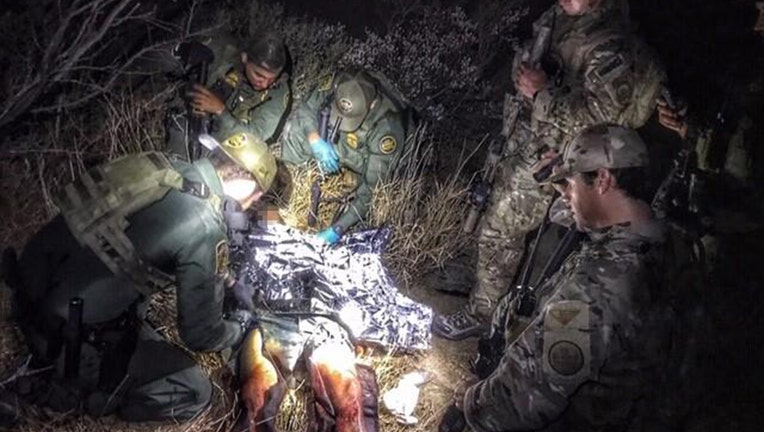 Border Patrol agents treat a man with gunshot wounds. The man had crossed the border from Mexico into the U.S. near Del Rio, Texas, Jan. 9, 2020. (U.S. Customs and Border Protection)

DEL RIO, Texas - A gunman who was wounded in a shootout with Mexican police crossed the Rio Grande into the United States on Thursday, according to U.S. Customs and Border Protection.

The government of Mexico alerted U.S. authorities that at least one gunman may have made it across the border from Guerrero, a city in Mexico, and into Texas.

That prompted a search by Border Patrol agents, a tactical team, and helicopters from the CBP's Air and Marine Operations and U.S. Army National Guard, officials said.

"Agents located foot sign and what appeared to be a blood trail that led to an injured male with multiple gunshot wounds," CBP said in a news release.

Agents arrested the man and treated him at the scene. He was then airlifted to a hospital for medical treatment.

"Cartel violence in Mexico has been on the rise," Chief Patrol Agent Raul Ortiz said. "The Border Patrol works with the Government of Mexico, neighboring sectors, and law enforcement partners to respond to these incidents and keep the people in our areas safe."