An adventurous California wolf who traveled from Oregon all the way down to Southern California has died after being struck by some type of vehicle.

LEBEC, Calif. - An adventurous California wolf who traveled from Oregon all the way down to Southern California has died after being struck by some type of vehicle, state wildlife officials announced.

Known as OR-93, a radio-collared male wolf from Oregon who first entered California on Jan. 30, was found dead earlier this month along Interstate 5 in Kern County, according to the Center for Biological Diversity.

This year, the young wolf made headlines for traveling as far south as the southern Sierras and then west to San Luis Obispo and Ventura counties. He was the first reported wolf on the central coast in 200 to 300 years. The wolf traveled more than 1,000 miles in total, averaging 16 miles a day.

"I’m devastated to learn of the death of this remarkable wolf," Amaroq Weiss, senior wolf advocate with the Center for Biological Diversity, said in a statement on Wednesday. "His epic travels across California inspired the world. In this annual time of reflection, I thank him for the hope he gave us and for a brief glimpse into what it would be like for wolves to roam wild and free again. I only wish we’d been able to provide him with a safer world. California has to do so much more to preserve wildlife connectivity and protect animals like OR-93 from car strikes."

State wildlife forensics lab workers confirmed that OR-93 died of injuries consistent with a vehicle strike.

The California Dept. of Fish and Wildlife says the wolf is likely in search of a new mate, or a new wolf pack.

Weiss noted that the  tragedy is a reminder that wildlife habitat, especially in California, "has been sliced through by roads and development."

In Kern County, where OR-93 was found, the wildlands continue to be threatened by sprawl development, Weiss said. Protecting habitat and building effective wildlife crossings in the form of overpasses and underpasses would help wolves safely re-establish here and prevent imperiled species like mountain lions from becoming locally extinct.

The Center for Biological Diversity said that only around 20 known wolves now live in California. The state’s wolves include the Lassen pack, whose territory covers portions of Plumas and Lassen counties, the Beckwourth pack in eastern Plumas County and the Whaleback pack in eastern Siskiyou County. OR-103, a lone wolf who dispersed from Oregon, also occupies part of eastern Siskiyou County.

California’s wolves were wiped out in the early 1900s by a nationwide, government-sponsored eradication program on behalf of the livestock industry. Wolves began to return to Oregon and Washington in the 2000s. In 2011, a wolf from Oregon, OR-7, made his way into California, becoming the first wild wolf confirmed in the state in 87 years. Since then, more wolves have ventured into the state from Oregon and elsewhere. 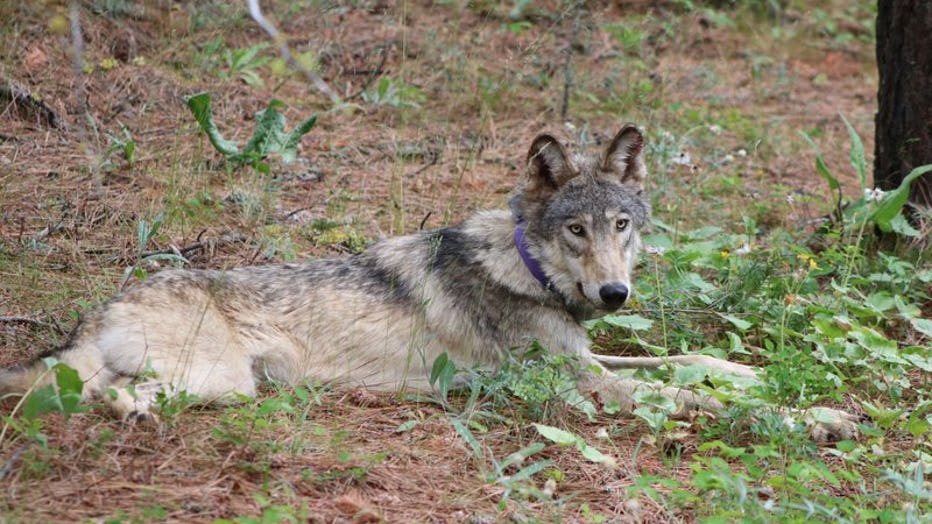 Gray wolves are protected as an endangered species in California under state law. Federal protections for wolves were recently ended by the federal government, but lawsuits have been filed by the Center and allies challenging this premature and unscientific delisting.

OR-93 was just over a year old when he was fitted with a radio collar in June 2020, near where he was born, south of Mt. Hood in Oregon.

He left his pack and headed south, arriving in Modoc County, California in late January. He continued traveling, moving through more than a dozen counties by late March. He then turned west and continued to San Luis Obispo County, where his last radio-collar signal was detected in early April, according to the Center for Biological Diversity.

In late August, a Kern County landowner checked his trail camera and discovered a video of the wolf taken near a water trough on his property in mid-May. In late September, three visual sightings were made of OR-93 in northern Ventura County.

"OR-93’s epic California journey was a beacon of hope in a time when other states are waging a brutal war on wolves, killing them by the hundreds," Weiss said. "He was simply doing what wolves do, heading out on his own, searching for a mate. I always knew the odds of his finding another wolf on the Central Coast were slim to none, but his relentless wanderings seeking a kindred spirit connected him to the hearts of so many. He won’t be forgotten, and we’ll honor his memory by continuing to fight for the safety of wolves everywhere."