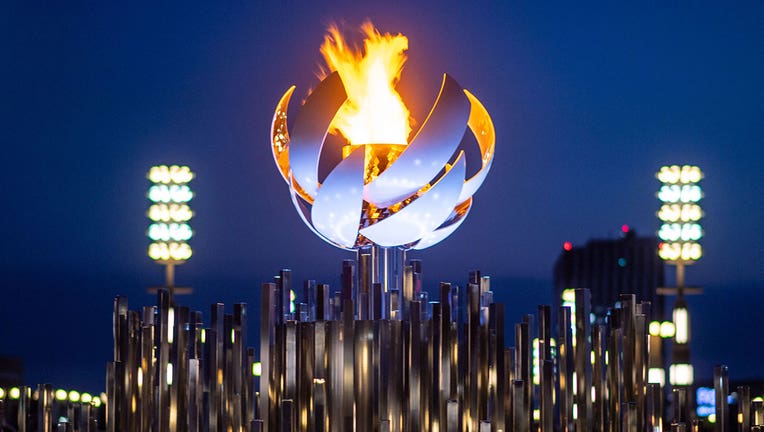 The Olympic flame is seen burning on the cauldron at Ariake Yume-no-Ohashi Bridge in Tokyo on July 25, 2021 during the Tokyo 2020 Olympic Games. (Photo by PHILIP FONG/AFP via Getty Images)

TOKYO - A Polish official says a Belarusian Olympic sprinter has been granted a humanitarian visa.

Runner Krystsina Tsimanouskaya plans to seek political asylum in Poland after alleging that her team’s officials tried to force her to fly home, where she feared she wouldn’t be safe from an autocratic government.

THIS IS A BREAKING NEWS UPDATE. AP’s earlier story follows below.

An activist group says a Belarusian sprinter is applying for a visa at Polish embassy in Tokyo on Monday and plans to seek asylum in Poland after alleging that officials tried to send her home from Japan.

Vadim Krivosheyev of the Belarusian Sport Solidarity Foundation told The Associated Press that the group has bought athlete Krystsina Tsimanouskaya a ticket to Warsaw for Aug. 4.

The foundation is an activist group that has been supporting Tsimamouskaya. She contacted them for help to avoid what she feared was a forced deportation to Minsk.

The foundation said she believed her life would be in danger if she returned to Belarus after she criticized her team officials. She said she’d been put in the 4x400 relay despite never racing the event.

Tsimanouskaya said in a filmed message distributed on social media that she was pressured by Belarus team officials and asked the International Olympic Committee for help.

"I was put under pressure and they are trying to forcibly take me out of the country without my consent," the 24-year-old runner said.

Tsimanouskaya was due to run in the Olympic 200-meter heats Monday.