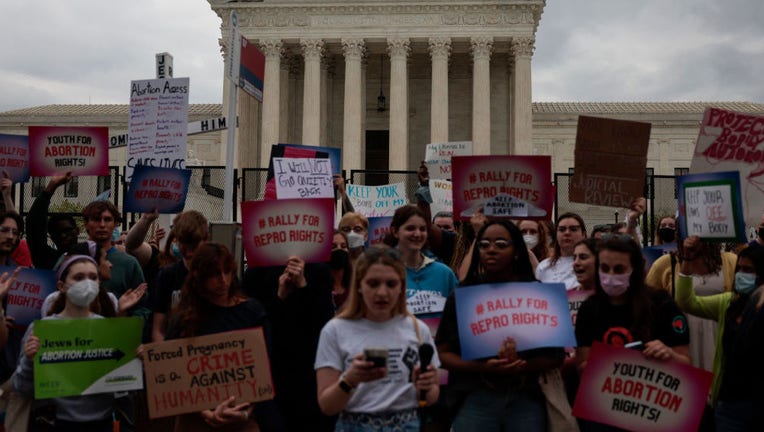 U.S. Supreme Court building is seen as an abortion rights rally takes place in front of it on May 05, 2022 in Washington, DC. (Anna Moneymaker/Getty Images)

PHILADELPHIA - In her first week on the job at a Philadelphia abortion clinic, Amanda Kifferly was taught how to search for bombs. About a year later, protesters blocked the entrances and exits of the The Women’s Centers, at one point pulling Kifferly into something resembling a mosh pit, where they surrounded her and shoved her around.

And on the night of last winter's arguments before the U.S. Supreme Court in a case that could end the nationwide right to abortion, people gathered outside a clinic in New Jersey with lawn chairs, a cooler and a flaming torch — a sight that brought to mind lynchings and other horrors of the country's racist past, says Kifferly, who now serves as vice president for abortion access.

RELATED: This is where abortion will likely be illegal if Roe v. Wade is overturned

Such scenes have become familiar for providers and patients across the country over the decades since the landmark 1973 Roe v. Wade ruling legalizing abortion. At times the violence has been far more severe, including bombings, arson and murders — from the 1993 killing of Dr. David Gunn outside a Florida abortion clinic to the 2015 fatal shooting of three people inside a Colorado Planned Parenthood.

Now providers and some in law enforcement worry what will come next. They're preparing for an increase in violence once the Supreme Court rules, saying there has historically been a spike when the issue of abortion gets widespread public attention, such as after a state approves new restrictions. If the decision ends Roe v. Wade — as a leaked draft opinion indicates may happen — they also anticipate protests, harassment and other violence to be more concentrated and intensify in states where abortion remains legal.

"We know from experience, it’s not like the people protesting clinics in banned states just pack up and go home," said Melissa Fowler, chief program officer for the National Abortion Federation.

The group and the hundreds of abortion clinics it represents have been on "heightened alert" since the opinion leaked, Fowler said. The organization has staff who specialize in security on call around the clock. They go out to clinics to do drills with employees and volunteers on scenarios such as bomb threats or active shooters and advise them on things like where to position security cameras. They also conduct safety assessments at the homes of physicians, monitor online threats and consult with local law enforcement.

In some places, local police are working with clinics to try to tamp down the potential for violence. In Jacksonville, Florida, the sheriff's office said last month they would station an officer outside the clinic, and police in Little Rock, Arkansas, installed a camera atop a crane near an abortion clinic that has been the site of protests, hoping to deter bad actors.
Immediately following the leak and for days afterward, police in Cherry Hill, New Jersey, initiated extra patrols around The Women's Center location, Kifferly said.

But the relationship between clinics and local police isn't always a positive one, and clinics must weigh whether having a heavy police presence will frighten patients, Fowler said. In Kifferly's experience, how well clinics and police departments work together varies by city and state. She recalled asking an officer for help as she was assaulted outside the Philadelphia clinic, and the officer responding that she should "call 911."

NAF, which collects monthly data from its over 500 members on harassment and violence, reported a spike in incidents in 2020, the most recent year for which the group has published data. The number of death threats or threats of harm and of assault and battery both increased by more than double, and providers reported more than 24,000 incidents of hate email or internet harassment.

RELATED: Next battle over access to abortion will focus on pills amid Roe v. Wade leak

Abortion providers reported an uptick after Donald Trump became president, and "extremists felt like it was OK for them not to be in the shadows," Fowler said. The coronavirus pandemic seemed to exacerbate things, Kifferly said, and in all four states where The Women’s Centers operates — New Jersey, Connecticut, Georgia and Pennsylvania — "we were besieged by protesters" angry that abortion clinics were open while their churches or businesses were closed.

Abortion opponents also have been targets of violence, and say they've also seen an increase in incidents since the draft opinion leaked, though the FBI in a 2020 memo described the incidents as historically "rare."

Shortly after the draft opinion became public, the Department of Homeland Security’s Office of Intelligence and Analysis said the draft had made extremist violence — by people on either side of the issue — more likely.

Susan B. Anthony Pro-Life America said those were among more than 40 incidents of violence, intimidation and vandalism at pregnancy centers and churches in recent weeks.

In early June, a man with a gun, knife, zip ties and other items was arrested near Justice Brett Kavanaugh's home in the middle of the night. He told police he wanted to kill the justice because he was upset about the draft opinion as well as the fatal mass shooting at an elementary school in Uvalde, Texas.

The court is expected to issue its ruling in the coming days or weeks.

As for what might occur next for abortion providers, much focus has been on how to provide care to people seeking it, should abortion be banned in more states. But Fowler said another concern is also front of mind: "We also need to focus on safety."