The House Intelligence Committee has released the Trump-Ukraine Impeachment Inquiry Report, which presents evidence that the president held up a White House visit and military aid to pressure his Ukrainian counterpart to investigate former Vice President Joe Biden and a debunked conspiracy that Ukraine, not Russia, interfered in the 2016 election. Reported by Mike Sacks

WASHINGTON - The conditions for impeaching a president are set out in a passage of the Constitution that is short enough to be a tweet and puzzling enough to be argued over more than two centuries later.

"The President, Vice President and all civil Officers of the United States, shall be removed from Office on Impeachment for, and Conviction of, Treason, Bribery, or other high Crimes and Misdemeanors."

Now, as the Democrats are leading only the fourth impeachment inquiry in the nation's history, how those words are interpreted in a modern context will determine the fate of Trump's presidency.

Impeachment cases turn on abuse of power, which is a political judgment and one that members of Congress are so far approaching along almost completely partisan lines. On Wednesday, the House Judiciary Committee opens hearings likely to produce articles of impeachment, akin to an indictment, and set the stage for a Senate trial to determine whether Trump keeps his office.

On Tuesday, the House released a report from Democrats on the House Intelligence Committee accusing Trump of misusing his office, obstructing Congress and placing "personal political interests above the national interests," in several respects an echo of allegations against the only president driven from office under threat of impeachment, Richard Nixon.

In mid-November, Democrats escalated their already pitched confrontation with the Republican president by accusing him of a specific crime, bribery, thereby linking his actions to an explicit constitutional standard for impeachment.

Begone with the Latin, House Speaker Nancy Pelosi said, brushing aside weeks of debate over a quid pro quo and alleging a corrupt, criminal act that everyone understands whether they agree it happened or not.

It was a logical move that carried risks, said Cal Jillson, a presidential historian at Southern Methodist University.

"The impeachment inquiry has entered its public phase, not just with the open hearings, but with a focus by both parties on speaking directly to the public," he said. "Hence, the Democrats decided, rightly I think, to ditch the Latin quid pro quo for the modern legal terms bribery and extortion.

"But they must be very careful to avoid falling into the Republican trap of assuming that impeachment requires proof of an actual crime — it does not."

As if setting that trap just a day earlier, Rep. Devin Nunes, the top Republican on the House Intelligence Committee, assailed the committee's impeachment hearings as "nothing more than an impeachment process in search of a crime." 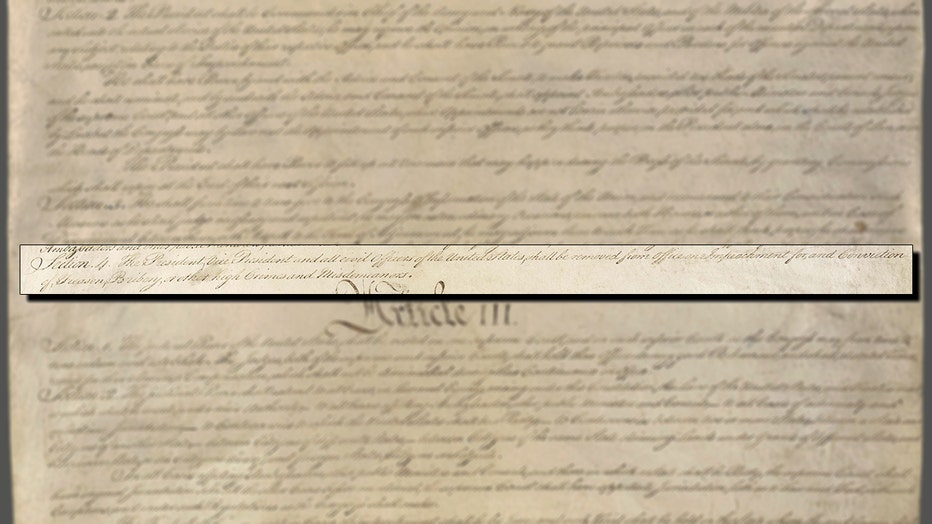 Constitutional scholars, steeped in the extensive, four-month record of the 1787 Constitutional Convention in Philadelphia, say the catch-all was intended by the framers to make clear that impeachment could be aimed at any consequential abuse of power so long as that abuse hurt the country at large.

"Their use of the term was not a cop-out or the result of fatigue," presidential historian Jeffrey A. Engel writes in "Impeachment: An American History," a multi-author book on the three impeachment cases of the past and the stirrings of today's case against Trump.

Rather, the Constitution's authors went through a painstaking and at times flailing process to strike the right balance between misdeeds that the public could punish in the next election and those requiring extraordinary intervention between elections.

For all of George Washington's flaws, like his hot temper, no one questioned the integrity or patriotism of the Revolutionary War commander and first president, according to Engel's reconstruction of the debate. But as Benjamin Franklin put it: "Nobody knows what sort may come afterwards."

One delegate came up with "General Slushington," an apocryphal name for a corrupt successor to General Washington: a meme of sorts.

They considered "malpractice or neglect of duty" as the conditions for impeachment.

"Corruption and some few other offences."

"Incapacity, negligence, or perfidy," suggested James Madison. He worried about a president who would "betray his trust to foreign powers."

The delegates gave preliminary approval to this: "He shall be removed from his office on impeachment from the House of Representatives, and conviction by the Senate, for treason, or bribery."

But that didn't capture every impeachable circumstance envisioned. George Mason suggested adding "other crimes and misdemeanors." Close, but too broad.

It became "high crimes" — "high" meaning an offense that strikes at the heart of the republic or the people. And high misdemeanors.

"The Constitution's editors thought it unnecessary to repeat the adjective 'high," Engel writes.

And there was nothing random about the capitalization. It was the style of the day to capitalize nouns like Treason, Bribery and high Crimes.

Months after the convention, Alexander Hamilton explained in the Federalist Papers that a commonly understood crime need not be the basis of impeachment. Offenses meriting that step "are of a nature which may with peculiar propriety be denominated POLITICAL, as they relate chiefly to injuries done immediately to the society itself."

The first presidential impeachment, of Andrew Johnson in 1868, was such a case, powered by his defiance of the will of Congress as he held back the advancement of black civil rights after the Civil War. He escaped conviction in the Senate by one vote.

The criminal code and broader political considerations about abuse of office went into the devastating mix against Nixon. The House Judiciary Committee approved three articles of impeachment alleging multiple examples of obstruction of justice, defiance of Congress and abuse of office, prompting his resignation before an impeachment vote.

The House impeached Bill Clinton on two articles, alleging obstruction of justice and perjury. Although Clinton no doubt lied about his affair with a White House intern, Republicans struggled to convince the body politic that his actions threatened the core of the nation, and he won acquittal rather easily in the Senate.

Today, Democrats are searching for the right words to capture what they regard as a president's impeachable behavior.

A quid pro quo — seeking something in return for something — need not be improper. Federal aid, whether to another country or to states, often comes with preconditions or strings attached.

To Democrats, the abuse arises from the fact that Trump sought a personal political benefit from the congressionally approved military aid to Ukraine — an investigation by a foreign power of potential 2020 presidential rival Joe Biden and of Democrats more broadly.

"The bribe is to grant or withhold military assistance in return for a public statement of a fake investigation into the elections," Pelosi said. "That's bribery."