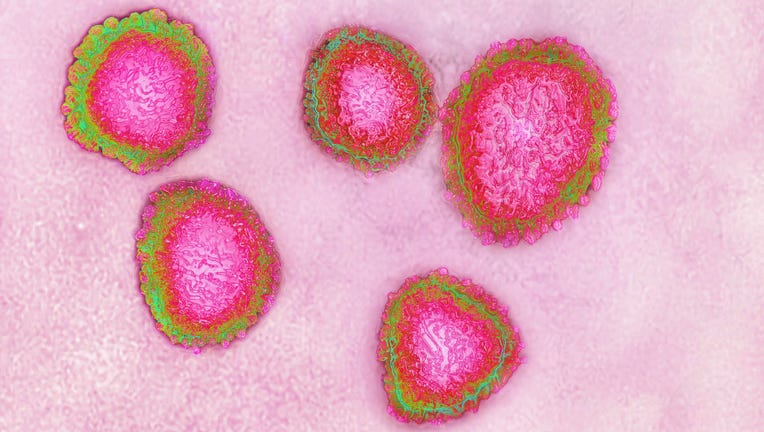 The human coronavirus is shown in a file image made from a transmission electron microscopy view. Photo by Cavallini James/BSIP/Universal Images Group via Getty Images

The schools took the steps after researchers said the virus that causes the disease called COVID-19 may have been circulating for weeks undetected in the state, and experts said more cases will probably be reported soon.

The state Department of Health says there are 27 confirmed cases, all in the Seattle area. The nine cases include four tied to a suburban Seattle care facility that has reported multiple virus cases and deaths.

Among the newly reported deaths was a man in his 50s who had been a resident of LifeCare in Kirkland, who died at Harborview Medical Center in Seattle Feb. 26. Tests later determined he died of COVID-19. Hospital spokeswoman Susan Gregg said some hospital staff may have been exposed while treating the patient but official don’t believe other patients were exposed. The hospital staff are being monitored and screened daily.

Among the new cases reported Tuesday were two men in their 20s who were hospitalized. It wasn't known how they were exposed.

And a federal immigration field office near Tukwila closed after an employee visited the LifeCare Center. Acting Homeland Security Secretary Chad Wolf said the decision was made "out of an abundance of caution" and that it would remain closed for 14 days.

The Eastside Prep private school in Kirkland said it would have students stay home and do online classes because of virus concerns. The school for grades 5 through 12 of nearly 500 students said on its website it had no known cases or suspected cases connected to the campus, but “we do not feel it is prudent to wait until there is a known case to take action.” The school said it would conduct online classes through March 27.

Meanwhile the Northshore School District, which has about 22,000 students just north of Seattle, was closed Tuesday so its teachers could also get ready to teach remotely if the need arises. Superintendent Michelle Reid said in a letter to students' families that the district was also making plans to help students who don’t have computers or internet access at home.

Seattle Public Schools has so far said it will not close, but is monitoring the situation.

Local and state health officials have not recommended school closures or cancellation of activities but said they respect the decisions of local school leaders.

Researchers at the Fred Hutchinson Cancer Research Center and the University of Washington on Sunday said they had evidence the virus may have been circulating in the state for up to six weeks undetected. If true, that could mean that there are hundreds of undiagnosed cases in the area.