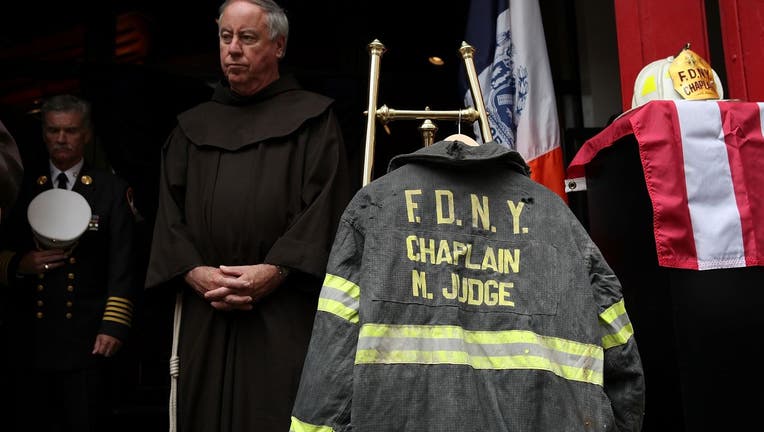 A prayer bench used by a Fire Department chaplain killed in the collapse of the World Trade Center towers was driven to the New York area to join the collection of the Sept. 11 Memorial and Museum. NEW YORK (AP)

NEW YORK (AP) - A prayer bench used by the Rev. Mychal Judge, a Fire Department chaplain killed in the collapse of the World Trade Center towers on Sept. 11, 2001, was driven to the New York area on Sunday to join the collection of the Sept. 11 Memorial and Museum, museum officials said.

The bench formerly belonged to Judge's twin sister, Dympnia Jessich, and spent the last five years at an Episcopal monastery in Rising Sun, Maryland, according to Sister Teresa Irene, a Carmelite nun there.

Its path to the Sept. 11 museum has been circuitous.

Judge, a Fransiscan who was praying in the lobby of the trade center's north tower when he was crushed by debris from the falling south tower, used to visit Jessich at her home in Berlin, Maryland, Sister Teresa Irene said. The prayer bench was kept in a bedroom Judge used, and its leather is worn from the imprint of his knees, she said.

"It’s worn where his knees would have been," the nun said. "It’s his life of prayer."

A new home for the bench became necessary as Jessich prepared to move to Texas several years ago, and friends suggested bringing it to the Episcopal Carmel of Saint Teresa monastery, some 130 miles north of Jessich's home in Berlin. Jessich, who was raised with Judge and their elder sister, Erin, in Brooklyn, died earlier this year.

A new home for the devotional furniture item became necessary once more with the nuns' impending move, so Sister Teresa Irene called Sept. 11 museum officials to see if they were interested.

"We’ve been stewards of this for five years," Sister Teresa Irene said on Sunday. "I think it’s important that it be in a place where it will be appreciated."

Amy Weinstein, senior curator of the museum, said the bench is a natural fit for the collection of the museum, which seeks to tell the stories of the victims of the terrorist attacks.

"It resonated with me immediately," said Weinstein, who traveled with collections manager David Burnhauser to pick the bench up on Sunday.

"When you look at it you can see how well used it was," Weinstein said. "Some of the leather is cracked. It’s really very visually powerful, but very quiet and unasssuing also."

A fire department chaplain since 1992, Judge was a revered figure in life who ministered to people with AIDS and homeless people as well as firefighters. His death praying with rescuers and victims in the 2001 terror attacks made him a legendary figure, with supporters campaigning for sainthood.

The bench where Judge knelt in prayer was moved to the Sept. 11 museum's New Jersey warehouse on Sunday because that was the day that worked out, not because it was Easter, Goldstein said. She added, "I think if was very fitting that we did it on Easter Sunday."