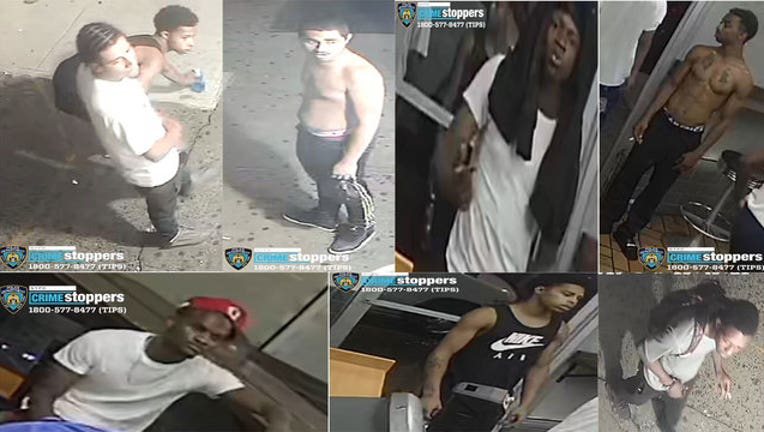 NEW YORK (FOX 5 NY) - UPDATE: Seven men were arrested by the NYPD following a request for the public's help tracking down four of the suspects in an early morning attack and robbery in Brooklyn.

A 41-year-old man was in front of 2962 Fulton Street on June 30 when four suspects struck him in the head with a pan and then stole his phone before running away.

Dwayne Harris, 18, of Schnectady; Dornell Harris, 21, of Schnectady; Jamal Lacey-Martinez, 23, of Brooklyn; Anthony Pierre, 21, of Brooklyn; Justin Pierre, 18, of Brooklyn; Luis Rodriguez, 17, of the Bronx and Joseph Gonzalez, 37 of Franklin Square were charged with robbery, gang assault and reckless endangerment. Gonzalez also faces a charge of criminal possession of a weapon.

The victim suffered a facial laceration, spinal fracture, and bruises. EMS took him to Brookdale Hospital where he was listed in serious condition.

Anyone with information on the identity of the suspects is being asked to call the NYPD’s Crime Stoppers Hotline at 1-800-577-TIPS (8477), or for Spanish, 1-888-57-PISTA (74782). The public can also submit their tips by logging on to the Crime Stoppers website at www.nypdcrimestoppers.com or on Twitter @NYPDTips.