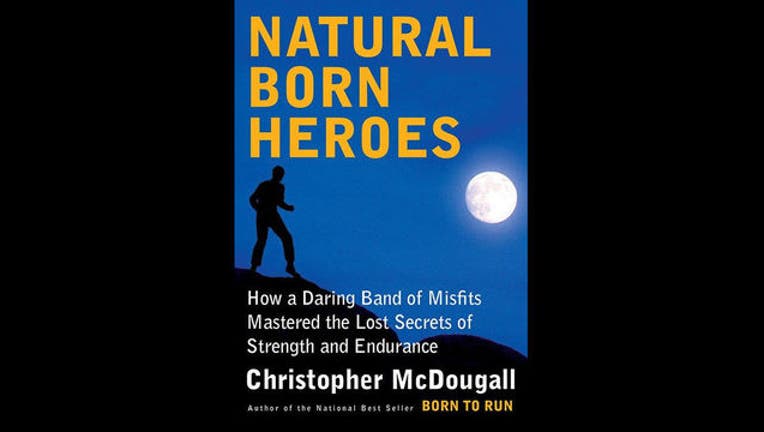 NEW YORK - If you've ever seen a runner in Central Park or along the New York City Marathon course wearing shoes that look like gloves, you can sort of blame (or credit) Christopher McDougall. The former war correspondent's 2009 bestseller "Born to Run" is about runners from the Tarahumara tribe of Mexico's Copper Canyon. The book is credited with bringing running in sandals or those aforementioned funny-looking toe shoes or barefoot into the mainstream.

In the new book "Natural Born Heroes" (Alfred A. Knopf), McDougall explores the theme of heroism, anchored by a World War II-era mystery in which resistance fighters on the Greek island of Crete kidnapped a Nazi general and then vanished into the wild.

Most of these heroes were not professional soldiers but were simply men and women of the countryside who managed to stay alive with limited resources while outrunning and outfoxing thousands of German troops. "How do these guys physically survive?" McDougall said he wondered. "You're living behind enemy lines, taking on the most lethal fighting force in human history, you're living off the land. Sometimes you're going 50 to 100 miles at a time on foot with no food." McDougall answers that question by delving into natural human movement, endurance, strength, determination, cunning, bravery, nutritional efficiency, and much more.

I met McDougall on a sunny morning in Brooklyn's Prospect Park to talk about the success of "Born to Run" (soon to be a movie starring Oscar winner Matthew McConaughey) and the journey he took while writing the new book. Here are edited excerpts of our interview, which he warmly referred to as "two dudes talking."

1. Most writers hope that their books are going to be bestsellers. But did you think that "Born to Run" would be so influential?

CHRISTOPHER: You're right, your fantasy is that everyone is going to buy it. I thought of "Born to Run" as a really interesting adventure story. I thought that would be the appeal because there are 26 million runners so you give them a juicy story. No, I had no idea that it would actually penetrate in the whole idea of barefoot running the way it did. Matter of fact, that chapter — I almost cut it out of the book, because to me it was kind of a little slow moving, wasn't really part of the drama, but I felt this was information that should be on the record.

2. Do you hope "Natural Born Heroes" will be influential, too? What do you hope will be the biggest takeaway?

CHRISTOPHER: I'm traveling with this really cool gang of people — parkour and Wildfitness experts. Today, we're driving in from [Connecticut], and Tara Wood [of Wildfitness] goes: "Oh my god, imagine if you had an entire population of people who were suddenly moving their bodies and felt joyful in their movements and could vault up on a table. It would just transform the world." All the serenity and self-esteem that comes from that, and that's the first time it clicked and, yeah, if people get this message you can very easily change your metabolism and very easily make yourself injury-free and joyful. That penetrates. The consequences are just amazing.

3. What was the most surprising thing you learned in researching the book?

CHRISTOPHER: We think of heroes as being this kind of an accident — it's the guy who happens to run inside a burning building and come out with a baby. But the Greeks didn't look at it that way. They didn't want to wait and hope that a hero would show up so they crafted this art of the hero — and it still was alive on the island of Crete during World War II. So when resistance fighters went up against the German army, they're actually tapping into this heritage of strength, skill and compassion that was a remarkably effective fighting force.

4. In the book, you write about these Ancient Greek self-defense techniques, some that migrated over to Asia. Are you confident you can kill a man with your bare hands?

CHRISTOPHER: No, but that was the beautiful thing about it was, particularly on Crete, it wasn't about killing people because there were 80,000 German soldiers. And the Cretans realized "We're not going to kill 80,000 of these guys — they've got all the guns, the weapons — let's do something else." And that's the art of the hero. The art of the hero was finding what is the practical solution. The greatest of all the Greek was Odysseus. He wasn't necessarily the best fighter. He was crafty, he was crafty as all hell. He was actually the descendant of thieves, so he had this bloodline of craftiness. On Crete, they came up with this brilliant idea: rather than killing 80,000 guys let's just grab one. Let's cut the head off and maybe the body will die. That was a non-violent solution, and that was what they were looking for. Me personally? Killing somebody with my bare hands? I would like to find every possible way to not do that.

5. How involved are you in the "Born to Run" movie? Some authors sell the rights to their books and then get shut out.

CHRISTOPHER: [Bestselling thriller author] Harlan Coben says that when you make a deal you basically chuck your book over the fence, they chuck a bag of cash back over the fence, and you go your separate ways. I've been really lucky because the people involved in this project are passionate about the book. They were fans of the book, they read it and incorporated into their lives. These are people who became runners. And so we've had a very friendly, respectful back and forth. And where we are right now is waiting for the screenwriter to finish a script that everyone is really happy with. I've seen the first half and it's really good. And Matthew McConaughey is the same way. He actually read born to run, contacted his agent and said he wants to be a part of this.

5½. OK, so you have "Born to Run" and "Natural Born Heroes." Will there be a third "Born" book to round out the trilogy?

CHRISTOPHER: You know, I've got two really cool ideas in mind I want to write. I haven't figured out how to do the "Born Trilogy" yet. Maybe I'll just call it the "Born Supremacy."

Learn about the book