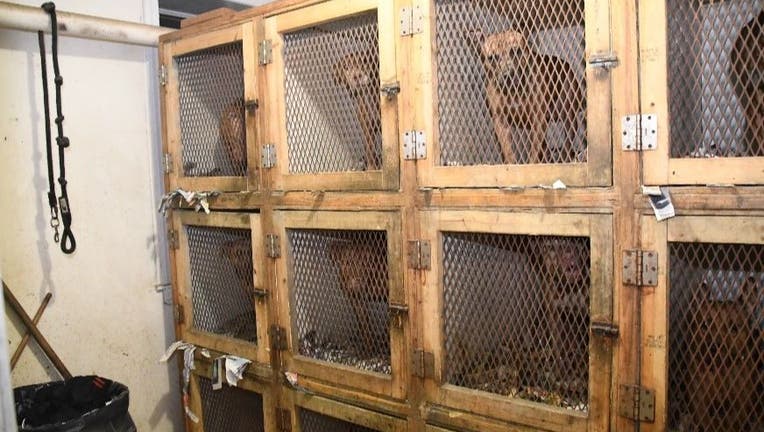 NEW YORK - An Upper Manhattan building superintendent, a veterinary worker and two other men have been charged with running a dogfighting ring after authorities said an identity theft investigation yielded an animal-abuse case.

Rivera, 55, who is accused of training dogs to fight, plus stashing two loaded guns and several kilograms of heroin and fentanyl in his apartment in the building he oversaw — denies the charges and looks forward to returning to court, said his lawyer, Brian Wagner.

None of the four men is charged with identity theft. But information on the dogfighting emerged partly from court-ordered wiretaps in the ongoing ID theft probe, prosecutors said.

Evans Fuentes, 39, trained dogs, and two of the four pit bulls in his apartment were found in a closet with the door closed, according to prosecutors. His lawyer, Gary Koos, said Fuentes pleaded not guilty.

Edward “Big Myke” Johnson, 37, is accused of finding animals and locations for two dogfights in the Bronx, and prosecutors said he turned his own dog over to Rivera and Fuentes to train and fight. A request for comment was left for Johnson’s attorney.

Prosecutors said Benito Gittens, 46, treated injured dogs so they could keep fighting and euthanized those that couldn’t recover, though he isn’t a licensed New York veterinarian or veterinary technician.

His lawyer, Meir Moza, said Gittens is an animal lover who has worked in veterinary settings for a decade and adamantly denies any involvement in dogfighting or animal abuse. Moza suggested his client was given “the wrong information, was in the wrong place at the wrong time.”

"We’re hoping that the truth will come out,” and Gittens expects to be vindicated, Moza said.

The American Society for the Prevention of Cruelty to Animals is caring for the seized dogs and says it hopes many of them will ultimately be able to be adopted.