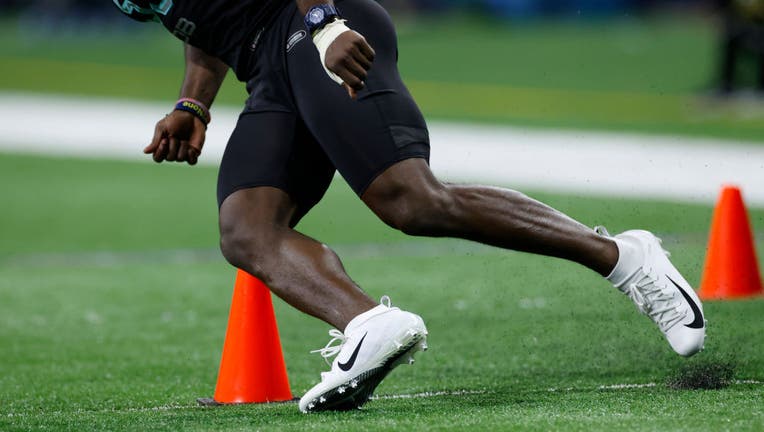 NEW JERSEY - Hours before New Jersey closed all gyms indefinitely last month because of the COVID-19 global pandemic, 30 NFL draft hopefuls had a chance to showcase their talents in a “virtual” pro day at TEST Football Academy in Martinsville.

It was the culmination of countless hours the players had spent training and preparing, both physically and mentally, for their actual pro days that ended up being canceled. None of the players at TEST’s virtual pro day attended the NFL combine so this was their best shot to show what they can do.

“I spent 12 weeks at TEST with 5-6 hours of work a day,” said Griffin Clancy, an offensive lineman from University at Albany. “We were very close to getting our opportunity eliminated because of COVID-19.”

But Kevin Dunn, founder and CEO of TEST Sports Clubs, and Geir Gudmundsen, the director of football operations, weren’t going to let that happen. They quickly organized the event in anticipation of a nationwide lockdown that forced sports to shut down.

“We just huddled up on Friday the 13th to figure it out,” Dunn said. “We had to do something for these guys.”

Dunn and Gudmundsen decided to turn their typical, mock pro days into a live event streamed online on Facebook. Players gathered at the facility on March 16 and performed various drills — 40-yard dash, shuttle, three-cone — for four hours. The video has more than 8,500 views.

“We just tried to make it as authentic and as real as possible and give scouts the opportunity to view the whole thing from where their perspective would be and bring a virtual experience right to their living room,” Dunn said. “That was the only way that these kids would have the opportunity. We’ve sent multiple scouts to our Facebook page because we saved the feed. They’ve watched it and reached out to us about the times.”

Serritella says he expects 15-20 “non-combine” players to be selected next week, down from the average of about 30 players per draft in previous years.

“Under the circumstances, it went very smooth,” said Gudmundsen, a former offensive lineman who signed with the Buffalo Bills as an undrafted rookie in 2005 and played in the Arena Football League. “The kids needed another opportunity to be able to be seen. It’s huge for kids that might not be drafted or are on the cusp of that.”

Clancy, listed at 6-foot-5, 305 pounds, said the numbers he posted were personal bests.

“I just need one shot,” he said. “I’ve always been the underdog in life so I’m not afraid of a challenge. Looking forward to next week and this process.”

“For a guy like Griffin from a smaller school, you want to get as many opportunities for scouts to see him as possible,” Rickert said. “Losing the pro day workout can be a big challenge. For a credible facility like TEST to organize the virtual pro day and make the content available was a huge help to us. Many scouts have commented to me that they were able to get a sense of how well Griffin moves based on the film.”

Greg Liggs, a defensive back from Elon, flew in the day before TEST’s virtual pro day and ran the 40-yard dash in 4.47 seconds.

“With everything going on, this pro day allowed us to display all the hard work we put in since the end of the football season,” Liggs said. “Being able to put numbers on tap is a huge win for guys during this time because it gives each player one last fighting shot at making there dreams come true, especially small-school guys like myself. This was a giant win toward making my NFL dreams come true.”

“It was an awesome opportunity for them to get this time to showcase their talent,” Fabrikant said. “NFL scouts have seen the video and are able to take this information and share it with the decision-makers.”

“The virtual pro day was vital for us athletes,” Haines said.

Since TEST opened in 1999, Dunn said 253 out of 397 athletes they’ve trained made it onto a professional football team’s roster. Among those were 2013 Super Bowl MVP Joe Flacco, eight-time Pro Bowl cornerback Patrick Peterson, and four-time Pro Bowl fullback Kyle Juszczyk.

Thirty more players are hoping to make that list.