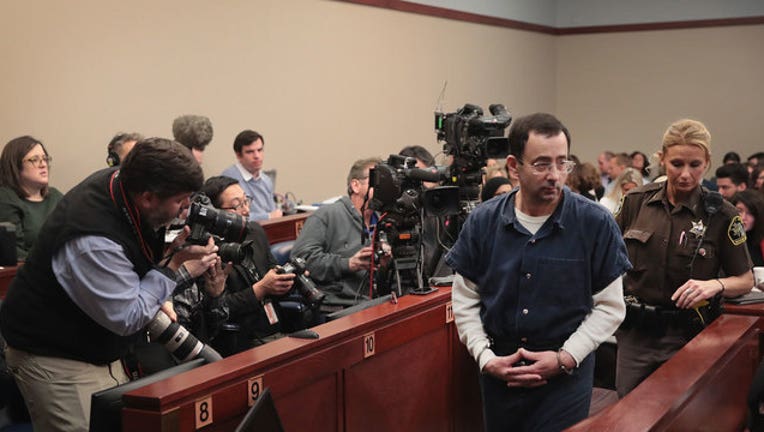 Larry Nassar walks into the courtroom to listen to victim impact statements prior to being sentenced after being accused of molesting about 100 girls while he was a physician for USA Gymnastics and MSU. (Photo by Scott Olson/Getty Images)

“We support their decisions to resign at this time. We believe this step will allow us to more effectively move forward in implementing change within our organization," Kerry Perry, president and CEO, said in a statement. "As the board identifies its next chair and fills the vacant board positions, we remain focused on working every day to ensure that our culture, policies and actions reflect our commitment to those we serve."

The announcement comes as dozens and dozens of young women make statements during Larry Nassar's sentencing hearing that's now reached day five. With each day of testimony, more survivors want to tell their stories publically. A total of 144 victims are expected to speak on how Nassar sexually abused them while he was employed by Michigan State University and USA Gymnastics, or USAG.

Among those who spoke were Olympianis McKayla Maroney, Jordyn Wieber and Aly Raisman, who called out USAG for what they felt was a lack of action.

Perry released a statement last week saying she went to hear the victims speak, and that "their powerful voices leave an indelible impact on me and will impact my decisions as President and CEO every day."

Aly Raisman gets fierce with Nassar, USOC, and USA Gymnastics

"Continuing to release statements of empty promises thinking that will pacify us will no longer work," Raisman said.

Perry was named president in November 2017, after Nassar worked with the team.