A number of students were injured after a school bus crash in Orange County on Wednesday morning.

NEW YORK - Three people including an elementary school student were injured in a crash involving a school bus and a truck Wednesday morning in New Windsor, New York.

A Commercial Tree Service Truck was heading westbound on Route 207 when it crossed over the double yellow line and struck the Washingtonville School District School Bus that was driving eastbound on Route 207, according to police.

Seven students from Little Britain Elementary School were able to walk off the bus before being transported to St. Luke’s Hospital in Newburgh where they were treated and released, according to a statement on the district website. 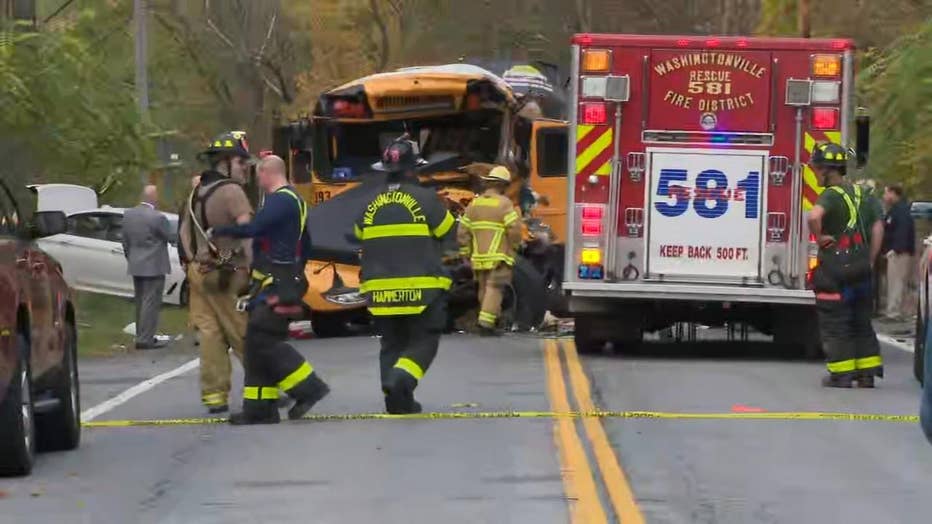 ​Rescue crews are seen on the scene of a bus crash in New York.

One student who was sitting behind the driver was admitted in critical but stable condition, said police. The bus driver and the truck driver were in critical condition.

The crash occurred at approximately at 8:32 a.m. off Beattie Road.

All parents had been notified. A crisis support team was available onsite at the school to assist students, faculty and staff, according to officials.

New York State Assemblyman Colin Schmitt tweeted a request for prayers for those involved in the crash.

"Please say a prayer for the young students involved in a serious bus accident in New Windsor. Our first responders are doing heroes work this morning. God lift up all impacted."

"The district is very grateful for the rapid and professional response from all emergency service providers. Updates will be provided as needed," said officials.

The accident was still under investigation.