Thirteen states are holding primaries throughout the month of May, with five happening this week: Idaho, Kentucky, Oregon, North Carolina and Pennsylvania.

This week’s primaries follow a resounding win in Ohio's May 3 contest by Trump's Senate candidate, JD Vance, though his endorsement didn't carry the weight needed in Nebraska to pull a gubernatorial candidacy win. Republican voters on May 10 picked Jim Pillen over the rival supported by Trump, Charles Herbster, a businessman who faced allegations late in the campaign of groping multiple women.

The sway of Trump’s endorsement will be on the line again Tuesday, where’s he’s thrown his name behind candidates in at least three of the states.

For governor, he’s backed Idaho’s lieutenant governor, Janice McGeachin, who stirred controversy when she issued executive orders banning mask mandates during the height of the pandemic when the state’s governor, Brad Little, was out of office on business. The two have had a fraught relationship and are up against each other in the polls now. 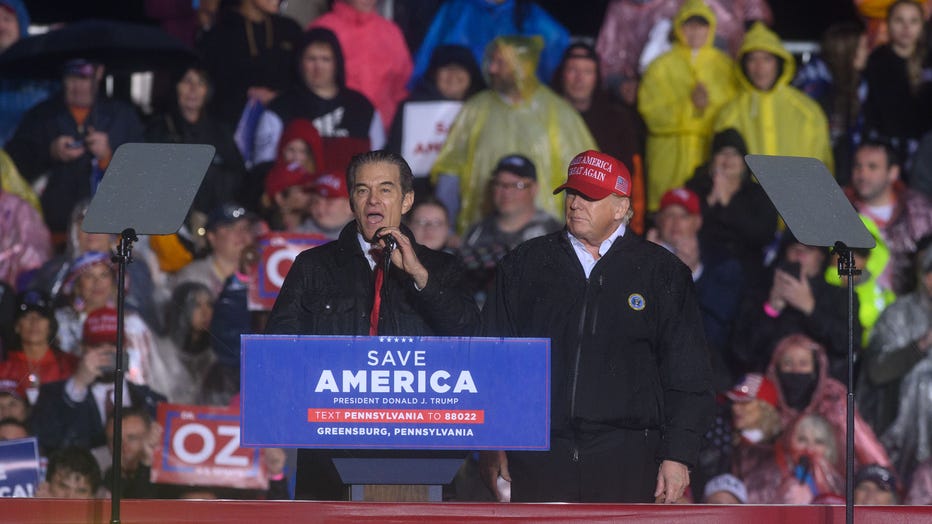 The race getting the most national attention in Pennsylvania is for the open seat of retiring Republican U.S. Sen. Pat Toomey.

It’s a crowded GOP playing field, including the Trump-endorsed Oz, who’s best known as the host of daytime TV's "The Dr. Oz Show" and is leading in the polls. On Saturday, the leading Democrat in the mix said he'd had a stroke.

In the governor’s race, the winner could bring some 2024 implications into focus for a swing state.

Some Republicans are wringing their hands over the prospect that a far-right candidate, state Sen. Doug Mastriano, could emerge as the winner in the crowded field. They fear Mastriano, who has promoted Trump's lies of widespread election fraud in the 2020 election, is unelectable in November and likely to squander an opportunity to replace Democratic Gov. Tom Wolf, who is prevented by term limit laws from running again.

On the Democratic side, the state's two-term attorney general, Josh Shapiro, is unchallenged in his gubernatorial bid.

Tuesday’s primary may not be the final word for would-be nominees: First-place candidates must get more than 30% of the vote to avoid a July 26 runoff.

Up for grabs is the Senate seat being vacated by retiring Republican Richard Burr, in which Trump has endorsed Budd. It’s a crowded race, with 11 names in the hat for both the Republican and Democratic nominees.

On the Democratic side, if former chief justice of the North Carolina Supreme Court Cheri Beasley wins - and wins again in November - she’ll be the state’s first Black U.S. senator.

Several districts also have congressional races, including the state’s 11th District where Trump has endorsed Cawthorn.

Little, the Republican governor, is trying to survive a primary challenge from lieutenant governor McGeachin, a far-right conservative who has been backed by Trump.

The relationship between Little and McGeachin has been fraught. On two occasions when Little went out of state last year, McGeachin claimed to be in charge and issued executive orders to block COVID-19 mandates. Little, who had never tried to implement any pandemic-related mandates, rescinded both orders when he returned.

In February, McGeachin delivered a taped speech at a white nationalist gathering in Florida. She later said that she was taking an opportunity to speak about Trump's "America First" agenda and that the "media wants us to play a guilt-by-association game."

The only Democrat in Kentucky’s congressional delegation is retiring, opening up his seat for the first time in 16 years.

The Louisville mayor's race is also getting interest this year after someone fired on one of the candidates while he was in his campaign office. Democrat Craig Greenberg escaped with a bullet hole in his sweater in the Feb. 14 shooting, and a local social justice activist was charged with attempted murder.

Greenberg is one of eight candidates running in the Democratic primary. A Republican hasn't held the mayor’s office in Kentucky’s largest city in several decades.

In liberal Oregon, the primary for governor is shaping up as a test between the moderate and progressive wings of the Democratic Party.

Several districts also have congressional races, including the state’s new 6th District which has drawn national buzz as one of the most expensive Democratic congressional primaries this year. It has attracted 16 candidates, including Democratic newcomer Carrick Flynn, who is backed by a cryptocurrency kingpin.

This story was reported from Detroit. FOX TV Digital's Austin Williams and The Associated Press contributed.