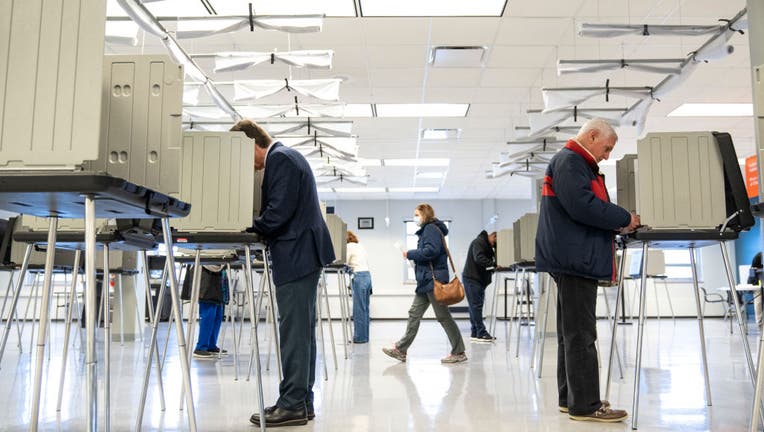 At left, Ohio State Senator Matt Dolan, a Republican candidate for U.S. Senate in Ohio, votes early in the May 3 Primary Election at the Cuyahoga County Board of Elections on April 28, 2022 in Cleveland, Ohio. (Photo by Drew Angerer/Getty Images)

Thirteen states will be holding primaries in the month of May, beginning with Indiana and Ohio on Tuesday, May 3.

On May 3, Ohio voters will pick nominees for governor and the U.S. Senate while Indiana voters consider whether their Legislature should become even more conservative.

Here’s what to watch as the Ohio and Indiana primaries unfold:

Voting in Ohio comes against the backdrop of a chaotic and still unresolved redistricting battle.

Big-ticket items include nominations for governor, where Democrat Nan Whaley could be the first woman to secure the nomination, and the coveted open U.S. Senate seat of retiring Republican Rob Portman.

Seven Republican candidates are on the ballot for the seat after months of party division jockeying for former President Donald Trump’s endorsement. Trump twice won Ohio by more than 8 percentage points, so many viewed getting his nod in the Senate race as critical to winning the crowded Senate primary.

Trump endorsed "Hillbilly Elegy" author JD Vance, a move that divided the state as other opponents had aired months of ads highlighting Vance’s past anti-Trump statements.

The election could provide a fresh window into Trump’s sway among the party faithful.

Currently, Republicans control all statewide offices and have had legislative supermajorities for the past decade. Challengers in this year’s midterm say the legislature hasn’t been aggressive enough on issues from attempting to ban abortion to overturning COVID-19 restrictions that were ordered by the state’s Republican governor.

More than a dozen Indiana House members are trying to hold off Republican primary challengers who want to push the Legislature further to the right.

This story was reported from Detroit. FOX Television Stations’ Austin Williams and The Associated Press contributed.