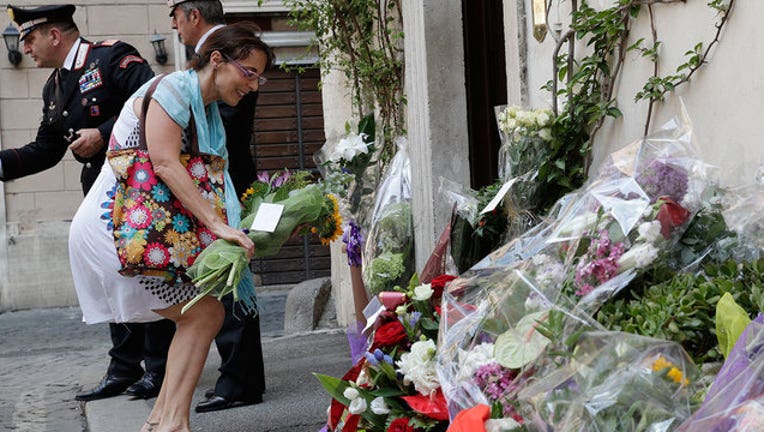 A woman leaves flowers in front of the Carabinieri station where Mario Cerciello Rega was based, in Rome, Saturday, July 27, 2019. (AP Photo/Andrew Medichini)

ROME (AP) - Two American teenagers were jailed in Rome on Saturday as authorities carry out a murder investigation in the killing of an Italian police officer.

A detention order issued by prosecutors was shown on Italian state broadcaster RAI, naming the suspects as Gabriel Christian Natale Hjorth and Finnegan Lee Elder. The detention order didn't give their ages, but says they were both born in San Francisco in 2000. Police earlier said they were 19.

Prosecutors said in the order that Elder is the main suspect, accusing him of repeatedly stabbing Carabinieri paramilitary policeman Mario Cerciello Rega, 35, who was investigating the theft of a bag after a drug deal gone wrong in Rome. Natale Hjorth is accused of using his bare hands to strike the officer's partner, who wasn't seriously injured in the attack.

Both suspects were also being investigated for attempted extortion. Elder's lawyer, Francesco Codini, said his client exercised his right not to respond to questions during a detention hearing held Saturday in the Rome jail where the two teens are being kept. Natale Hjorth's lawyer wasn't immediately available for comment.

A judge at the detention hearing hasn't ruled if the suspects will be kept in custody beyond an initial three-day period.

An Italian investigator who spoke on condition of anonymity since the probe was ongoing said that the pair had snatched the bag of a drug dealer in Rome after the man apparently gave them "a different substance" instead of cocaine.

The Carabinieri said the Americans demanded a 100-euro ($112) ransom and a gram of cocaine to return the bag. The alleged dealer called police, saying he had arranged a meeting with the thieves to get his bag and cellphone back. Police says there was a scuffle at the rendezvous site and the policeman was stabbed eight times, dying shortly afterward in the hospital.

The Carabinieri said video surveillance cameras and witnesses allowed them to quickly identify the two Americans and find them in a hotel near the scene of the slaying. Police said the two Americans were "ready to leave" Italy when they were found.

In a search of their hotel room, the Carabinieri said they found a long knife, possibly the one used to attack Cerciello Rega. Police said the knife had been hidden behind a panel in the room's ceiling. Police also said they found clothes the two apparently were wearing during the attack.

The Carabinieri statement said the two Americans admitted responsibility after being questioned by prosecutors and faced with "hard evidence."