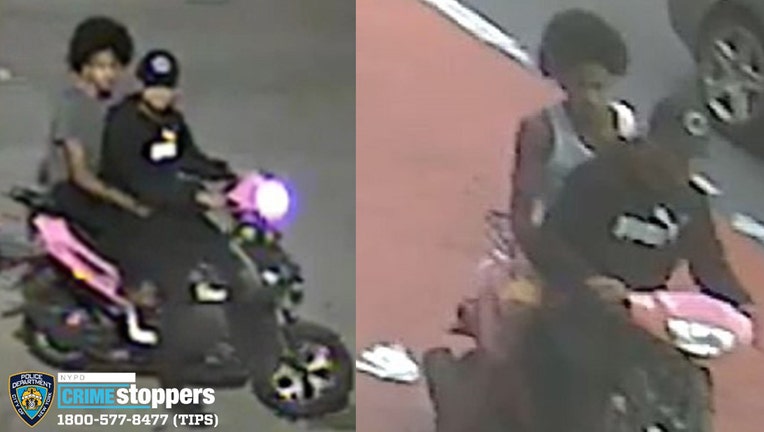 Police released images of two men on a motorized scooter wanted for a string of robberies. (Courtesy of NYPD)

NEW YORK - Two men on motorized scooters went on a robbery spree in the Bronx and upper Manhattan in early September, yanking necklaces from at least six people and attempting to steal a cell phone from another, police said.

Around 8:30 p.m. on Friday, Sept. 4, the two men rode up to a 25-year-old man on the street near White Plains Road and Archer Street in Parkchester and grabbed his necklace and drove off, the NYPD said.

About 20 minutes later, the same thieves stole a $1,000 necklace from a 27-year-old man near Harrod Avenue and Westchester Avenue in Soundview, police said.

About an hour later, the pair struck twice in less than 10 minutes in front of 213 East 170th Street in Mount Eden, cops said. They snatched a necklace off a 30-year-old woman and rode away, police said, but apparently returned and minutes later and tried to grab a 34-year-old woman's phone but didn't succeed. They drove off eastbound.

The next day, the scooter bandits, described as being between 20 and 30 years old, targeted at least three people in the afternoon, the NYPD said.

Police released images taken from a security camera at about 10 p.m. on Sept. 4. The images show two men on a motor scooter with pink body panels.