The shooting — which happened at about 2:30 a.m. at a Mueller Co. plant in Albertville — adds to a slew of homicides around the country, and wasn't even the worst of the morning. Several hours later, gunfire in Chicago claimed twice as many victims.

In the Alabama case, a manhunt ended when the shooter's body was found inside a Jeep in Guntersville, about 15 miles (24 kilometers) away from the factory, shortly after daybreak. Multiple weapons were found inside the vehicle, Albertville Police Chief Jamie Smith said at a news conference.

Smith said the suspect appears to have died from a self-inflicted gunshot wound. What prompted him to kill and maim his coworkers wasn't immediately clear, the chief said. He called the shooting "completely unprovoked."

The chief identified the dead men as Michael Dobbins and David Horton, and the shooter as Andreas Horton, 34. He said the Hortons weren't related, and had "no ties other than co-workers." Two other people were hospitalized, and their conditions weren't immediately known. At least one of them was transferred to a hospital in Chattanooga, Tennessee, the chief said.

Cody Windsor, a Mueller employee who was at home at the time, told the AP that he knew both Hortons, but also didn't know what might have prompted the shootings.

Windsor said friends working the overnight shift told him the shooting happened in a part of the plant where fire hydrants and pipes are painted, and that an announcement about an active shooter was made over a PA system at the factory, which occupies several buildings over a large area near a railroad track, with fire hydrants stored on racks outside.

Windsor said he and David Horton, a foundry helper who could do most any job in the plant, were buddies at work and often hung out together during breaks, he said. "We’d sit in our cars and listen to music," he said. "Andy" Horton, Windsor said, was quiet and recently went through the death of his mother.

"We work together and we bond together. We’re here as much as we are at home," said Windsor. From now on, he said, he might be nervous "that somebody is going to walk in the door and shoot you."

Ann Walters told Al.com that Dobbins was her grandson, and that he had been working at the factory for nearly a year, saving up to buy a home and a car. "He was a perfect gentleman, everybody will tell you. He was good to everybody and put his family first," she said.

The chief read a statement from the company, which said "Mueller Water Products is shocked and deeply saddened by the horrific tragedy."

"Our entire focus is on the health and well being of our colleagues and we are committed to providing help and support to their families," the company statement said. 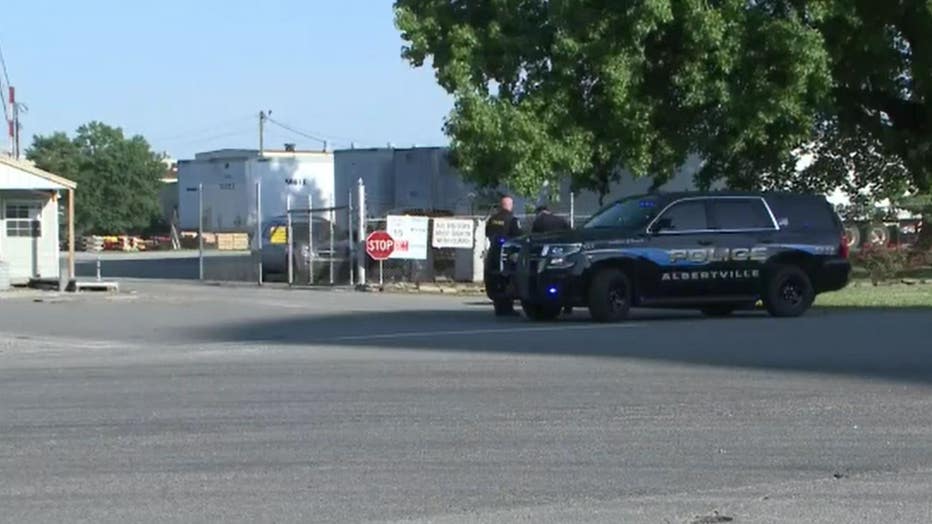 Mueller Co., based in Cleveland, Tennessee, is a subsidiary of Atlanta-based Mueller Water Products Inc., which calls itself a leading maker of water distribution and measurement products in North America. More than 400 people work at the plant in Albertville, giving the city in northwest Alabama its nickname of "Fire Hydrant Capital of the World."

The growing gun violence nationwide has police and criminal justice experts concerned. Within hours of the Alabama gunfire Tuesday, four women were killed and four other people were wounded in a pre-dawn shooting at a home in Chicago, police said. The toll from this past weekend included two people killed and at least 30 others wounded in mass shootings in Chicago, the Texas capital of Austin, and Savannah, Georgia.

Law officers had hoped that last year's spike in homicides would subside as the nation emerges from coronavirus restrictions, but they remain higher than they were in pre-pandemic times.

"There was a hope this might simply be a statistical blip that would start to come down," said Chuck Wexler, executive director of the Police Executive Research Forum. "That hasn’t happened. And that’s what really makes chiefs worry that we may be entering a new period where we will see a reversal of 20 years of declines in these crimes."

Albertville is a tight-knit community, and its people will come together to support the victims' families, city spokeswoman Robin Lathan said.

"Everyone is absolutely heartbroken and devastated," she said. "The Mueller Company is part of the lifeblood of who we are in the city of Albertville. It’s just a devastating blow."