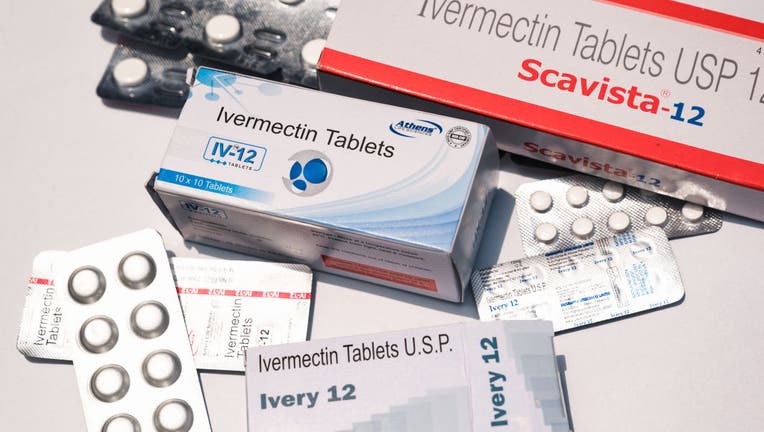 This picture shows the tablets of Ivermectin drugs in Tehatta, West Benga, India on 19 May on 2021. (Photo by Soumyabrata Roy/NurPhoto via Getty Images)

David Scrase, the acting head of the state health department, said the patients had used ivermectin, an anti-parasitic drug used to treat livestock.

The patients who died were reportedly 38 and 79 years old.

"I know that one of the patients had a fairly serious issue with COVID… The patient was on dialysis and ivermectin was basically taken in lieu of or instead of effective treatments," Scrase said.

The Food and Drug Administration warned against people taking the drug intended for horses, cows and other large livestock after multiple reports of hospitalizations.

The New Mexico Department of Health has been monitoring cases of ivermectin toxicity among persons attempting to treat COVID-19.

All deaths related to ivermectin fall under the statutory requirement to report to the Office of the Medical Investigator in the state.

During the COVID-19 pandemic, ivermectin dispensing by retail pharmacies has increased, as has use of veterinary formulations available over the counter but not intended for human use. The National Institutes of Health’s (NIH) COVID-19 Treatment Guidelines Panel has determined that there is currently insufficient data to recommend ivermectin for treatment of COVID-19.

In 2021, poison control centers across the U.S. received a three-fold increase in the number of calls for human exposures to ivermectin compared to the pre-pandemic baseline. In some cases, people have ingested ivermectin-containing products purchased without a prescription, including topical formulations and veterinary products.

Veterinary formulations intended for use in large animals such as horses, sheep, and cattle can be highly concentrated and result in overdoses when used by humans.
Animal products may also contain inactive ingredients that have not been evaluated for use in humans. People who take inappropriately high doses of ivermectin above FDA-recommended dosing may experience toxic effects.

Clinical effects of ivermectin overdose include gastrointestinal symptoms such as nausea, vomiting, and diarrhea. Overdoses are associated with hypotension and neurologic effects such as decreased consciousness, confusion, hallucinations, seizures, coma, and death. Ivermectin may potentiate the effects of other drugs that cause central nervous system depression such as benzodiazepines and barbiturates.