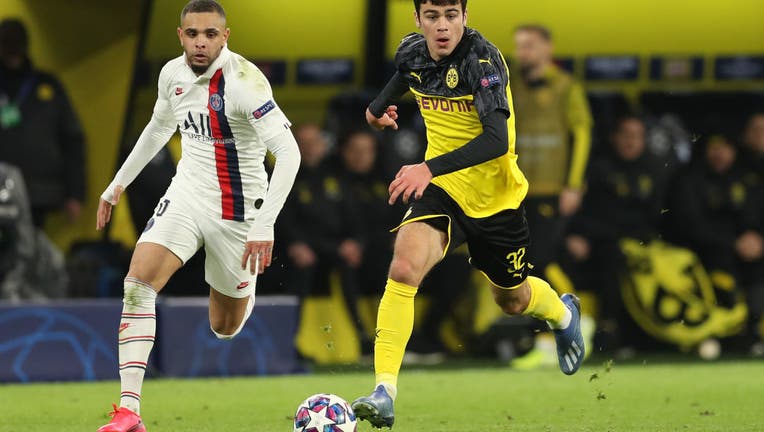 DORTMUND, GERMANY - FEBRUARY 18: Gio Reyna of Borussia Dortmund runs with the ball during the UEFA Champions League round of 16 first leg match between Borussia Dortmund and Paris Saint-Germain at Signal Iduna Park on February 18, 2020 in Dortmund, G

The 17-year-old Borussia Dortmund midfielder will be invited to the American training camp ahead of exhibitions on March 26 at the Netherlands and four days later at Wales.

"We want our younger players performing, playing at a high level, and he's doing that," U.S. coach Gregg Berhalter said Wednesday. "As a result of that he gets an opportunity with the first team."

Reyna turned 17 in November and made his senior team debut for Dortmund on Jan. 18 in the Bundesliga at Augsburg. He scored his first goal Feb. 4 in a German Cup match at Werder Bremen and on Feb. 18 became the youngest American to appear in a European Champions League match when he entered in the second half against Paris Saint-Germain.

He has appeared in eight games for Dortmund, all as a substitute.

"What I really like from him was his positioning," Berhalter said. “When he gets the ball in the pocket, his awareness to turn and his efficiency in when he's turning is excellent — doesn't waste any touches turning. He turns right away. Second thing is his ball security under pressure is phenomenal.”

Reyna was part of the U.S. team at last year's Under-17 World Cup. Berhalter said it would not be possible to have Dortmund release Reyna to play for the U.S. Under-23 team in Olympic qualifying next month.

Gio Reyna would be the sixth-youngest player to appear for the U.S. senior team — 16-year-old Freddy Adu was the youngest

The Reynas would be what is thought to be the sixth father-son pair to play for the U.S. after Jim and George Brown, Harry and Ty Keough, Joe and Philip Gyau, Joe and Alain Maca, and Tim and Taylor Twellman.

Reyna would follow another young Dortmund star to the national team. Midfielder Christian Pulisic was 17 when he made his U.S. debut in March 2016 and has become the top American player. Reyna can play wide on both sides and also is viewed by Berhalter as a possible central attacking midfielder.

“He can play in a number of different positions. I like him being able to affect the game on the offensive side, similar to Christian," Berhalter said. “I think he gives you flexibility. ”

Pulisic, sold to Chelsea last year for a 64 million euro (then $73 million) transfer fee, has not played since Jan. 1 because of an adductor injury.

"As Christian adapts to the rigors of the Premier League, I think he's going to be fine," Berhalter said. “We're confident that Chelsea together with us is going to get him in a spot where he's performing regularly.”

RB Leipzig midfielder Tyler Adams has not played since Feb. 9 because of a calf injury. The 21-year-old transferred in January 2019 from Major League Soccer's Red Bulls to Leipzig. He injured a groin during the German Cup final on May 25 and did not return until Dec 21.

“Any time you have younger players playing at high levels, you have to be very careful with their load,” Berhalter said. “He had basically a year-and-a-half without rest, adapted to a higher level in a very aggressive playing style, and that could take a toll on a young player's body. And you saw some of the effects of that with his longer-term layoff. With him, now, the way I see, he's got back to playing, and until your body hardens and strengthens, you may have some some difficulties.”

Forward Tim Weah, a 20-year-old son of current Liberia President and former FIFA Player of the Year George Weah, has played just two matches in his first season with Lille. He was sidelined from Aug. 17 until Feb. 16 by a torn hamstring, then tore a hamstring in his return match.

“It's a really unfortunate series of events. We have a very high-speed athlete, a fast athlete, that they're susceptible to hamstring injuries,” Berhalter said. “It may be another lengthy layoff.”

The U.S. also lost D.C. United midfielder Paul Arriola, who had surgery Tuesday to repair a torn ACL and likely will miss the MLS season and the first six World Cup qualifiers.

Berhalter said defender Reggie Cannon and midfielder Jackson Yueill will be at Olympic qualifying in Mexico next month rather than with the national team.