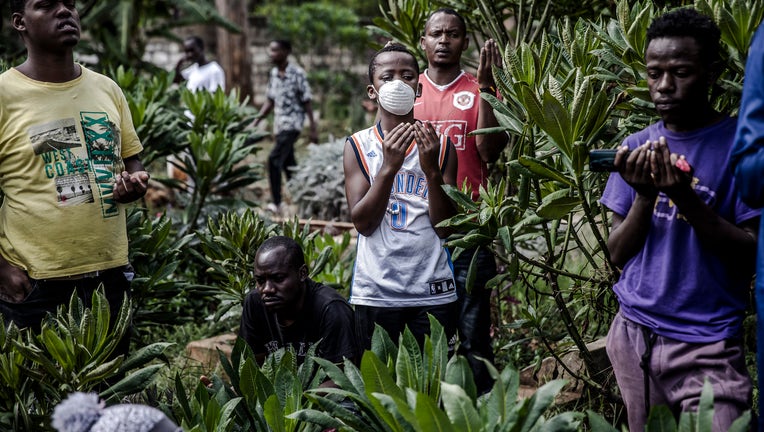 A friend of Yassin Hussein Moyo prays with a face mask on during Yassins burial at Kariokor Muslim Cemetery in Nairobi, Kenya on March 31, 2020. 13-year-old boy Yassin Hussein Moyo was shot in the stomach the night before allegedly by Police officers

NAIROBI, Kenya (AP) - The bullet struck the 13-year-old as he stood on the balcony of his family’s home with other children. Below, police officers moved through the crowded neighborhood, enforcing Kenya’s new coronavirus curfew.

The boy’s family mourned him Tuesday on the outskirts of Nairobi, washing his small body according to Muslim rite, carrying him in a crowd through the street to the cemetery and burying him in the dirt with their bare hands.

The killing of Yasin Hussein Moyo might be the latest example of police abuse of coronavirus restrictions seen in several African nations in the past week.

Kenya’s police inspector general has ordered an investigation into the boy’s death by “stray bullet,” including a forensic analysis of all firearms held by officers at the scene.

“Our sincere condolences to the family,” the police tweet said.

The family was stunned. Women wept in a courtyard at the cemetery, and leaned in for a final goodbye before the boy’s body was wrapped completely in white cloth.

The father, Hussein Moyo, was furious.

“They come in screaming and beating us like cows, and we are law-abiding citizens,” he said. His son died a few hours after midnight from the gunshot to the stomach.

Police shot him, a neighbor in the adjacent apartment block said.

“I could see police aiming at the building,” Hadijah Mamo said. She heard gunfire and saw tear gas, and minutes later “I heard people screaming that the boy had been shot.”

Police fired tear gas at a crowd of hundreds of commuters who tried to reach a ferry in the port city of Mombasa before the first night of curfew began. Elsewhere, officers were captured in mobile phone footage whacking people with batons.

Another death has been blamed on police enforcement of the curfew. A motorcycle taxi driver, Hamisi Juma Mbega, died from his injuries after being beaten. He had breached the curfew by taking a pregnant woman to a hospital in Mombasa, according to a post-mortem report obtained by The Associated Press.

And the Independent Policing Oversight Authority, a civilian body established by parliament, said it is looking into another death blamed on police brutality, that of a bicycle taxi driver in Homa Bay county.

Human rights groups, the Catholic church and even Kenya’s health ministry have condemned the actions of a police force that has long been accused of abuses.

Kenya now has 59 coronavirus cases, including one death from the disease.