LOS ANGELES - An estimated 335 firefighters from multiple agencies knocked down a blaze and rescued evacuees at a high-rise apartment building that did not contain a sprinkler system in the Sawtelle neighborhood of West Los Angeles, fire officials said.

The fire ignited around 8:30 a.m. on the sixth floor and quickly spread to the seventh floor of The Barrington Plaza Apartments, which is located near the intersection of Wilshire Boulevard and Barrington Avenue.

Firefighters who were handling another incident nearby on San Vicente Boulevard were radioed to the building. 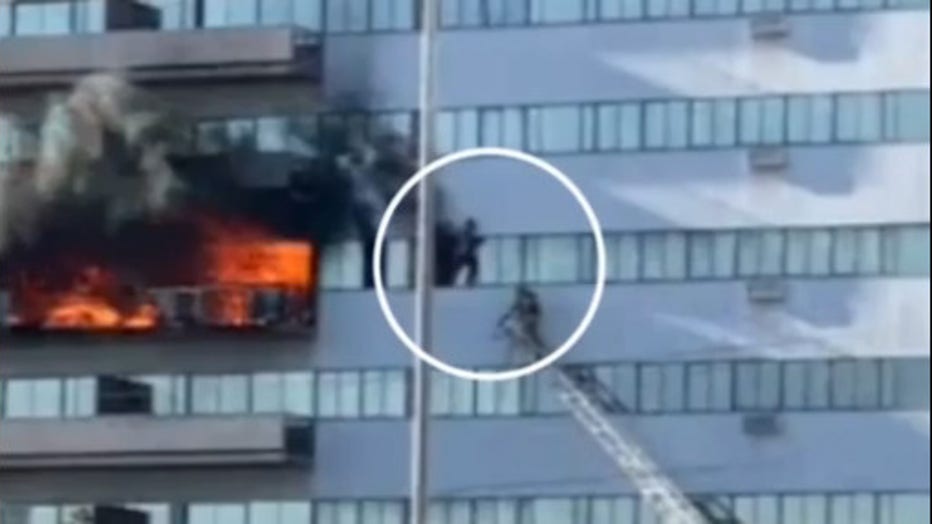 Of the 11 people injured, six were taken to the hospital. Firefighters hoisted 15 people to safety from the roof.

One man, believed to be an Airbnb guest of the burning unit escaped out a window and clung there until a firefighters could position a ladder close enough to bring him down.

Flames were seen shooting out the building while firefighters conducted their rescue efforts. Firefighters were seen escorting evacuees to the rooftop to where they were airlifted from the scene.

Firefighters escorting evacuees to the rooftop in the apartment building fire.

Fire crews made an aggressive and transitional attack and went through multiple air bottles.

Fire officials say the fire was knocked down by 9:56 a.m.

Witnesses at the scene told FOX 11 they heard an explosion before the flames erupted.  The fire erupted about two hours after a blaze broke out in a commercial building roughly three blocks away, and investigators were working to determine if the two fires were connected.

Firefighters conducted a floor-to-floor search of anyone needing assistance following the blaze.

Fire officials said after the blaze their priorities were clearing the building and helping those who may need medical assistance.

An evacuation center has been set up at 1350 Sepulveda Blvd.; the Red Cross is also on scene assisting residents in need of help.

The complex was built in 1961 and was the largest and tallest apartment building west of Chicago at the time. According to city code the building is not required to have a sprinkler system. However, when it opened, residents complained of the lack of sprinklers. In addition, residents complained of electrical issues that were not addressed before safety standards were implemented, it was reported.

The building suffered millions of dollars in damages from a previous fire in 2013.

The cause of Wednesday's fire is considered suspicious, authorites said. The investigation is ongoing.