A resident at a Tampa apartment complex called the Hillsborough County Sheriff's Office to report a gator underneath a parked car, advising there was a pond nearby. When deputies and trappers arrived, they found a massive 10-foot gator in the parking lot.

TAMPA, Fla. - It's the beginning of alligator mating season, which means more gator sightings in Florida.

Such was the case on March 31, when a resident at a Tampa apartment complex called the Hillsborough County Sheriff's Office to report an alligator under a parked car.

Deputies and the Florida Fish and Wildlife Conservation Commission responded to the complex around 8:45 a.m. and found the massive reptile in the parking lot.

"The caller advised there was a pond nearby, but this was no small gator... it was 10'2'!!!" the sheriff's office wrote. 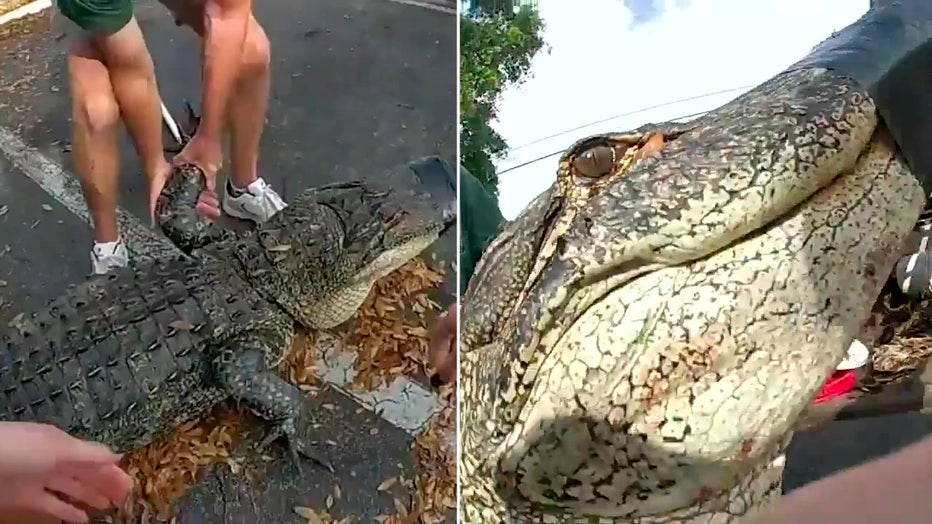 The agency posted a deputy's body cam video, showing multiple people hauling the massive gator into the back of a pickup truck.

They said no one was injured, and the animal was not harmed. FWC dispatched a contracted nuisance alligator trapper to transfer the reptile to an alligator farm.

RELATED: Massive gator gets trapped on lanai before taking a swim in family's pool

With alligator mating season underway, the sheriff's office and FWC warned residents to keep a safe distance from gators and never feed them. They also said to only swim in designated areas during daylight, and advised pet owners should keep their pets on a leash and away from the water's edge.

Gator mating season typically begins in May or June, but their courtship starts in early April. And that means more alligators sightings as the reptiles venture out in search of their mates.

By late June or early July, female gators will lay between 32 to 46 eggs. Incubation periods for alligators take about 60 to 65 days, and baby gators will be born in late August or early September, according to FWC.