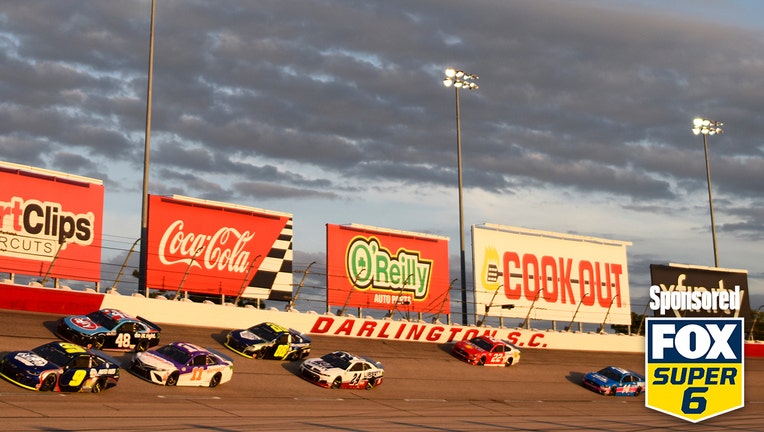 Kurt Busch, driver of the #1 Monster Energy Chevrolet, and Martin Truex Jr., driver of the #19 Bass Pro Shops Toyota, lead the field during the NASCAR Cup Series Cook Out Southern 500 at Darlington Raceway on September 06, 2020 in Darlington, South C

Darlington is beckoning for the first time in 2021 this weekend, promising a Mother’s Day filled with excitement and drama when the NASCAR Cup Series hits the Goodyear 400 on Sunday (3:30 p.m. ET, FS1).

After Kyle Busch won the Buschy McBusch Race 400 last weekend in Kansas, he moved into the Top 10 in the season point standings, though Denny Hamlin, who has eight Top 5 finishes in 11 starts and has won five stages, still leads the way.

Sunday's race is a great time to get involved in FOX Super 6 Stage 2 contest. If you can get the right answer to all six questions regarding Stage 2 of Sunday’s race, you can win $10,000 of Clint Bowyer’s money – absolutely for free. All you have to do is download the FOX Super 6 app, make your picks and wait for the action to begin.

Here’s a look at the questions for Sunday’s race, as well as some notes on each.

Which driver will have the best finishing position at the end of Stage 2?

Harvick is the only name on this list with a win at Darlington, earning three victories and 11 Top 5 finishes during his time there. That doesn’t necessarily guarantee future results, but it is usually a pretty good indicator.

Which of these drivers will have the most laps led by the end of Stage 2?

Fact: Hamlin has led for 744 laps – the most in the circuit this season by 233 over Kyle Larson. At Darlington, he has three wins and has lead for 593 laps in 17 races. That’s why he is considered the best pick of this group.

How many cautions will there be by the end of Stage 2?

There were back-to-back races at Darlington last year right after the circuit restarted after the COVID-19 pause that saw 10 and 11 cautions in both races. The style of track and the type of racing that goes on within the smaller confines – plus the need to ride up near the wall – usually means a few more yellow flags than normal.

The conventional wisdom is that Darlington could be a good track for the Toyota cars, which have fared pretty well in these races over the years, including Hamlin's win last year. That would favor Truex, who is second in the overall standings. However, Harvick has won two of the last three races there since last May and has shown an ability to really handle the track well.

Which manufacturer will have the most cars in the top 5 of Stage 2?

Ford and Toyota have dominated at Darlington over the last eight races, as Chevy hasn't won there since 2014. Expect a heavy presence by Toyota and Ford once again in the Top 5.

Which team will have the most drivers in the top 5 of Stage 2?

With Harvick having won two of the past three races, that speaks well to Stewart Haas. The only problem – in those three races, Harvick is the only one that has finished in the Top 5. If Hamlin and Truex finish well – and they have all season – it could be another good day for Joe Gibbs Racing.

Play Clint Bowyer's NASCAR Stage 2 FOX Super 6 contest for free, and you could win $10,000! Just download the FOX Super 6 app and make your picks now for your chance to win!