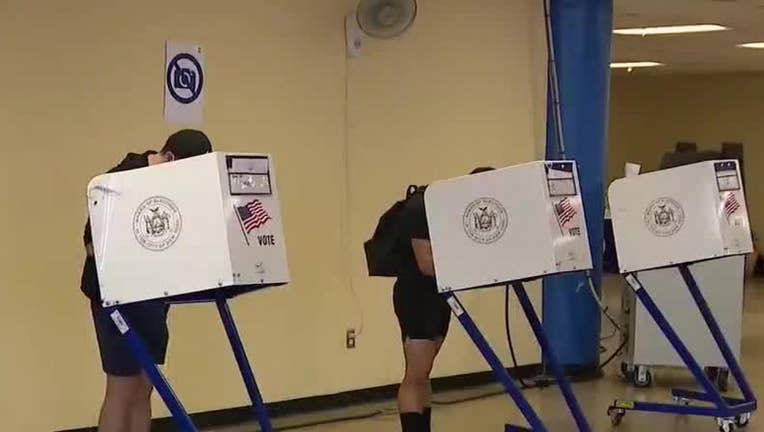 NEW YORK - Election Day falls on Tuesday, Nov. 8, 2022. For this general election cycle for the 2022 midterm elections, voters in New York and in New Jersey once again have the option to cast their ballots during an early voting period.

All registered voters are eligible to participate in the general election. The deadline to register to vote in the Nov. 8 election has passed in both New York and New Jersey.

Your poll site during the early voting period is most likely not the same as your Election Day poll site.

To check your voter registration status and find the correct polling site, enter your information on voterlookup.elections.ny.gov.

New York City voters can find their poll site and view a sample ballot at findmypollsite.vote.nyc.

If you don't want to vote during the early voting period, polls will be open on Election Day, Tuesday, Nov. 8, from 6 a.m. to 9 p.m. in New York. Election Day is also the final day to postmark your absentee ballot or drop it off at a poll site.

In-person early voting in New Jersey runs from Saturday, Oct. 29, through Sunday, Nov. 6, 2022. (Note that Monday, Nov. 7, the day before Election Day, is NOT an early voting day.)

You can check your voter registration status at voter.svrs.nj.gov/registration-check and find an early voting poll site in your county at nj.gov/state/elections/vote-early-voting.shtml.

New Jersey allows voting by mail for any reason.

New Jerseyans will cast ballots for the U.S. House of Representatives, school boards, and several many local and special races.

If you prefer to vote on Election Day, Tuesday, Nov. 8, polls will be open from 6 a.m. to 8 p.m. in New Jersey. This is also the deadline to either postmark or drop off your vote-by-mail ballot, if that's the voting method you're choosing.

If you've found this article to be helpful, please share it.