The race was closer than expected, but Kathy Hochul prevailed. What this means for partly politics in New York.

NEW YORK - FOX News is reporting that Democrat Kathy Hochul has won a full term to serve as New York's governor as she defeated her Republican opponent, Rep. Lee Zeldin.

She won a race that was dominated by the issues of the economy and crime.

Hochul focused much of her campaign on abortion rights and stemming the flow of illegal guns into New York City.

"Don't come here today and tell us that you've got a tough-on-crime plan that's just soft and squishy on guns," Hochul said of Zeldin at a campaign rally a week before the election.

"I'm going to continue working with local law enforcement, supporting the police, funding the police, making sure that they have money from the state that they've not had before," Hochul said. "I tripled the amount of money we give for law enforcement programs. I'm helping mayors in Syracuse, Rochester, Buffalo, Albany — anywhere they need help." 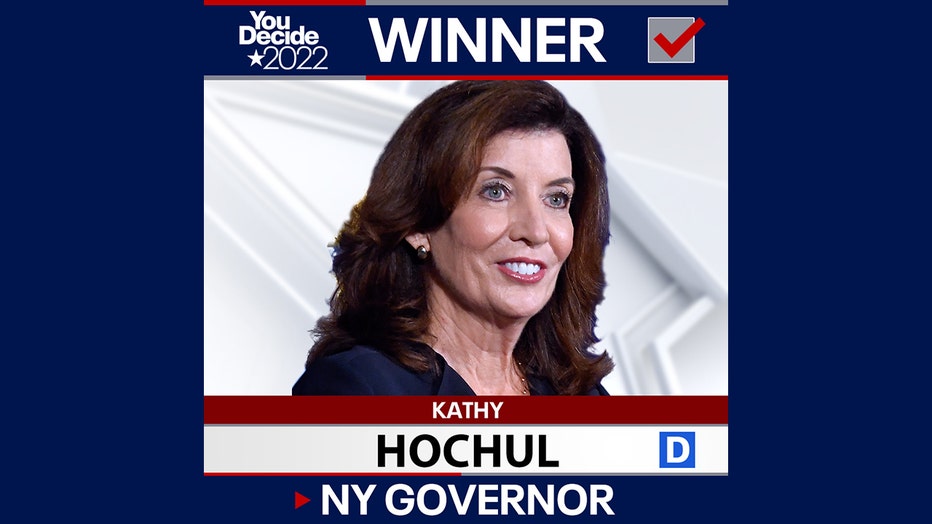 Democrats outnumber Republicans by more than two to one in the state but Hochul's lead dropped from double to single digits in some polls leading up to the election.

But some experts say that Hochul waited too long in her campaign to focus on crime and the economy, giving momentum to Zeldin.

"It's happening all over the country, there's an anxiety out there," Hochul said. "I understand that. But people are just getting to know me, I've been on the job just about a year now. But I work real hard. I'm fighting for New Yorkers."

Kathleen "Kathy" Courtney Hochul was serving her second term as New York's No. 2 in the executive branch in Gov. Andrew Cuomo's administration. She became governor after Cuomo resigned in August 2021 under a cloud of scandals.

She was the state's first female governor and now becomes the first woman elected governor in New York.

"I didn't come here to make history as the first woman governor," Hochul said. "I came here to make a difference. And that's how people will judge me many years to come."

In 2014, when Lt. Gov. Robert Duffy announced he wouldn't seek another term, Cuomo asked Hochul to join the Democratic ticket. They won the election with about 54% of the vote and again in 2018 with just under 60%.

As lieutenant governor, she chaired 10 regional economic development councils serving as the administration's voice. She was also the co-chair of the governor's Heroin and Opioid Abuse Task Force.

In 2015, the governor appointed Hochul to spearhead his Enough is Enough campaign to combat sexual assault on college campuses by hosting and attending more than two dozen events.

"As the highest-ranking female elected official in New York State, she continues to be a champion for women and families across the State," Hochul's official bio stated at the time.

Hochul promised a "fresh, collaborative approach" in state government when she took over.

"I want people to believe in their government again. It's important to me that people have faith," she said.

Under state law, Hochul took over as governor as soon as Cuomo's resignation was official. She was entitled to finish his term, which ends on Dec. 31, 2022.