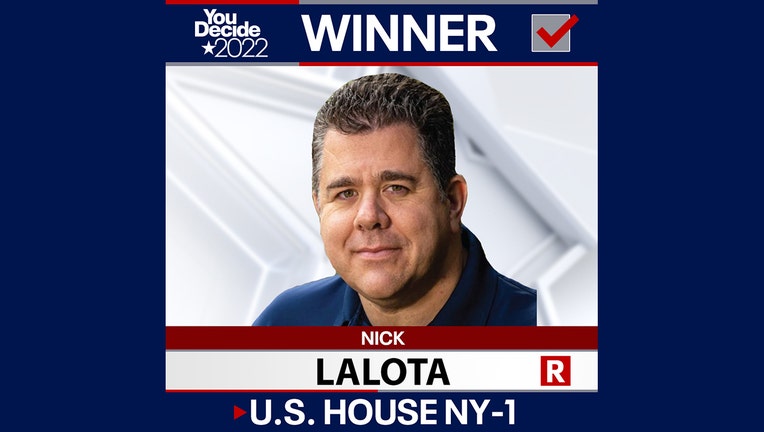 NEW YORK - Republican Nick LaLota, who is the chief of staff of the presiding officer of the Suffolk County Legislature, has defeated Democrat Bridget Fleming, a Suffolk County legislator, in a race to replace a seat held by Congressman Lee Zeldin, who ran for New York's governor in the 2022 midterm elections, according to the Associated Press.

The district includes the North Shore of Suffolk County and the Hamptons. The district was redrawn since the previous election.

LaLota is a U.S. Navy veteran and also previously served on the Amityville Board of Trustees.

Fleming is a former prosecutor who represents District 2 in the Suffolk County Legislature and previously served on the Southampton Town Council.

Ahead of Election Day, LaLota told FOX 5 News that his campaign was focused on the economy, public safety, and protecting freedoms.

"She’s running her campaign and I’m running mine," LaLota had said.

Fleming had said, "We want someone who will protect fundamental freedoms like a woman’s right to make her own medical decisions and have the backs of Long Islanders."

Political analyst Larry Levy, who is the executive dean of the National Center for Suburban Studies at Hofstra University, said it was an unusual election year with competition in the First District.

"There’s no incumbent and there are two candidates dealing with specific strengths and weaknesses that make this arguably a fair fight district," he said prior to the election.

Some political experts said the four congressional races out on Long Island could essentially determine which party has the majority in Congress.

"It’s possible we can wake up the day after elections and Long Island's four seats could be the ones that decide who has the majority or not," Levy said.