Delgado, a Democrat, will take on the largely ceremonial role previously formerly held by Brian Benjamin, who resigned following his arrest for federal corruption charges he denies.

Hochul touted fellow Delgado's work in Congress on bills to help veterans, small businesses, and those with student loan debt.

It was unclear when Delgado, who was first elected in 2018 to represent the Hudson Valley and the Catskills, would take office. At a news conference on Tuesday afternoon, Hochul said he would be sworn in before the end of the month.

U.S. Rep. Antonio Delgado, a Democrat who represents a district in upstate New York, will become the next lieutenant governor. He spoke about his intentions for his new role as Gov. Kathy Hochul's No. 2 and running mate.

The appointment comes a day after Hochul signed a law that will allow Benjamin's name to be removed from the ballot in the state's upcoming Democratic primary, and potentially allow Delgado to run for the lieutenant governor's job if he wants it permanently.

Delgado currently represents New York's 19th Congressional District, which includes the Hudson Valley and Catskills. Delgado identifies as Afro-Latino; he said his heritage is African American and Cape Verdean. He is the first person of color to represent Upstate New York in Congress and a member of both the Black and Hispanic Congressional Caucuses. 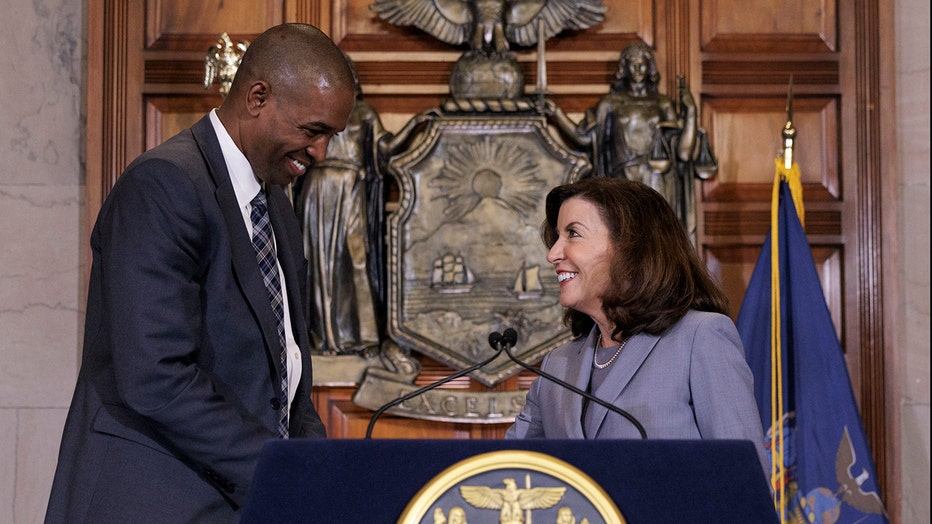 "I am proud to appoint Antonio Delgado, an outstanding leader and public servant, as Lieutenant Governor of New York, and I look forward to working with him to usher in a new era of fairness, equity, and prosperity for communities across the State," Hochul said. "We share a belief in working together to get things done for New Yorkers, and Representative Delgado has an incredible record of doing just that in Congress. With Antonio Delgado by my side serving as lieutenant governor, we will both make history - and make a difference."

"New Yorkers deserve a lieutenant governor who's working day and night to make lives better for working people and their families," Representative Delgado said. "Upstate, downstate, doesn't matter. We all want the same things, security, family, and opportunity. The key is to listen to New Yorkers from all walks of life and then be their voice to get the job done."

Delgado grew up in Schenectady and lives in Rhinebeck with his wife, Lacey, and their twin 8-year-old sons, Maxwell and Coltrane. He attended Colgate University and earned a Rhodes Scholarship to Oxford. Then, he received a law degree from Harvard Law School, where he met Lacey. He lived in New York City for several years as a young lawyer.