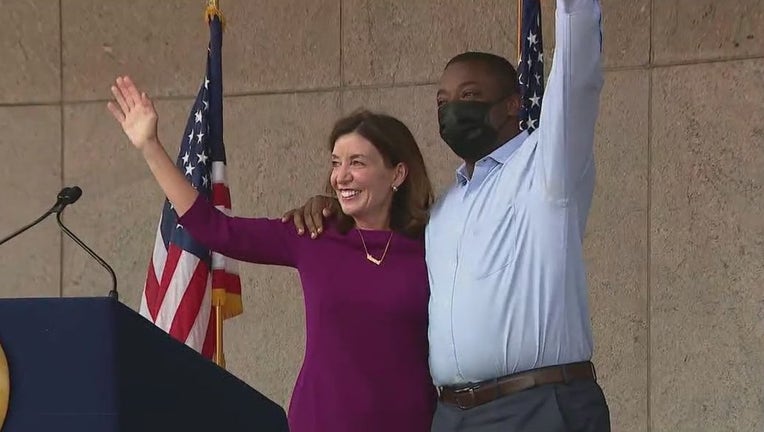 ALBANY, N.Y. (AP) - One man's scandal catapulted New York Gov. Kathy Hochul into office. Will alleged misconduct by another man hurt her chances of holding on to the job?

Hochul's previously smooth path to a Democratic primary win hit a major bump this week when her lieutenant governor, Brian Benjamin, resigned following his arrest in a federal corruption investigation.

One of Hochul's first big decisions as governor was to appoint Benjamin, then a state senator, after she took over from Gov. Andrew Cuomo, who resigned last summer rather than face impeachment over sexual harassment allegations, which he has denied.

Her leading opponents in both the primary and general election pounced, saying Hochul's pick of Benjamin at a time when he was already under scrutiny showed poor judgment.

"Either she's consistently shamefully out of the loop, or shamefully enabling through her inaction, and either way it's clear that unless we elect leadership outside of the old ways of Albany, these patterns of scandal and corruption will keep repeating," said New York City Public Advocate Jumaane Williams, who is running against Hochul for the Democratic nomination.

U.S. Rep. Tom Suozzi, a Long Island Democrat also trying to beat Hochul, piled on, saying her pick of Benjamin was part of a pattern of bad choices, which he said included cutting a deal that will give her hometown Buffalo Bills more than $1.1 billion to build and operate a new stadium.

"Hochul has fostered a culture of continued corruption with months of fundraising from pay to play insiders and people doing business with the state, and secretive budget deals that resulted in the billion dollar Bills stadium and little else," Suozzi tweeted.

Hochul, though, hasn't appeared to lose support from top allies.

News of Benjamin's arrest and resignation was nearly lost in the noise of a mass shooting on a subway train in New York City.

Hochul raced into town to attend a police news conference about the attack, where she ducked a question about Benjamin, then visited shooting victims in the hospital and rode the rails in a symbolic statement against fear.

"Right now Kathy Hochul has such a significant lead as far as polling and fundraising is concerned, I don't think as of now the troubles will hurt her drastically for the June primary," Fordham University political science professor Christina Greer said. "Obviously her opponents will raise questions and have raised questions about what she knew."

An indictment said that in exchange for the illicit donations, he helped a nonprofit organization controlled by the donor get a $50,000 state grant.

Prosecutors said Benjamin also offered to help the donor, a real estate developer, get a zoning variance from the city in exchange for a $15,000 donation to a political committee. And they said he lied to state officials about the investigation when he was being considered for the lieutenant governor appointment.

Benjamin's lawyers said there was "nothing inappropriate" about the grant and that their client's actions were "laudable — not criminal."

"It was a surprise, it really was," Hochul told WNYC host Brian Lehrer. "I made the best decision I could with the information I had at that time."

Questions about Benjamin's campaign committee and use of expense accounts had been the subject of scrutiny by journalists and state regulators prior to his selection as lieutenant governor, including stories in the Daily News about potential use of campaign funds for personal expenses, such as auto repairs and a party at a jazz club to celebrate his wedding.

Last week, Hochul had reiterated her support of Benjamin and described the probe into his campaign as "related to other people."

The arrest and resignation of Lt. Gov. Brian Benjamin has sent a shockwave through New York and the Democratic Party but some say he should've never been in that office to begin with. FOX 5 NY speaks with former Gov. David Paterson, who told the New York Post he'd heard "chatter" about Benjamin before he was appointed.

Hochul — who had also said she wasn't aware of any harassment in Cuomo's administration until after the claims became public — will now have to thread a fine line with voters, Greer said.

While she needs to claim ignorance of any wrongdoing by Benjamin, "she doesn't want to seem as though she's inept, as if she doesn't know what's going on right underneath her," Greer said.

Still, Hochul holds some big advantages. She raised nearly $22 million for her election campaign as of January, which dwarfed the $5.4 million raised by Suozzi and $222,000 raised by Williams.

One of the candidates expected to mount a serious challenge, Attorney General Letitia James, dropped out of the race quickly.

Just over half of Democratic voters said they would vote for Hochul in the June primary in a Siena College poll released in late March, compared with one-fourth of voters supporting Suozzi or Williams.

Democratic strategist Evan Stavisky said voters will likely ultimately judge Hochul based on their pocket books and her record.

"The governor being misled by someone who was then charged by the federal government for lying to her is probably not a salient point with voters," Stavisky said.

If Democrats wind up sticking with Hochul in the primary, she would be the expected favorite over most potential Republican challengers in a heavily blue state.

One wildcard: Cuomo has acknowledged thinking about entering the race late to potentially get his old job back. He's been making public appearances again lately, criticizing the state's Democratic leaders for shifting too far to the left and potentially positioning himself for a run.

Cuomo still sits on millions of dollars in campaign funds he could use to run as an independent candidate, if he chooses.

"She's getting hit on both sides, that's a very bad spot to be in," said Republican strategist Alex DeGrasse.