A preview of Election Day in New York.

NEW YORK - Gov. Kathy Hochul and her challenger Republican Rep. Lee Zeldin are still on the campaign trail in their last attempt to sway New Yorkers.

"I'll be such a strong governor because I understand the needs and I hear from people directly," Hochul told reporters during one campaign stop.

"This isn't about Republican versus Democrat," Zeldin said. "This is about all of us uniting."

Hochul visited a subway stop and a senior center on the Upper West Side on Monday, sticking mainly to Manhattan before she headed to Buffalo later in the evening.

"The early voting numbers are astounding. That is a very good barometer for us," Hochul said. "If Democrats vote, we absolutely win."

This is the first year there has been early voting for a midterm election in New York. More than 1.1 million New Yorkers cast their ballots in person during the nine days of early voting.

Manhattan and Brooklyn saw some of the highest voter turnout, which many Democrats are viewing favorably. Brooklyn reached 135,239 votes and Manhattan reached 133,618 votes.

Zeldin on Monday made a campaign stop in the Bronx and stuck to his main message.

"This current direction does not work," Zeldin said. "Kathy Hochul is not getting this job done. I look forward to doing everything I can to make the streets of New York safer."

This comes after a busy weekend for the two candidates.

On Sunday, President Joe Biden held a get-out-the-vote campaign for Hochul in Yonkers.

"It's a choice between two fundamentally different visions of America," Biden said.

"Lee Zeldin makes it sound like Kathy Hochul gets up every morning, goes to the nearest subway stop and hands out billy clubs and baseball bats to everybody who gets on the subway," Clinton said. 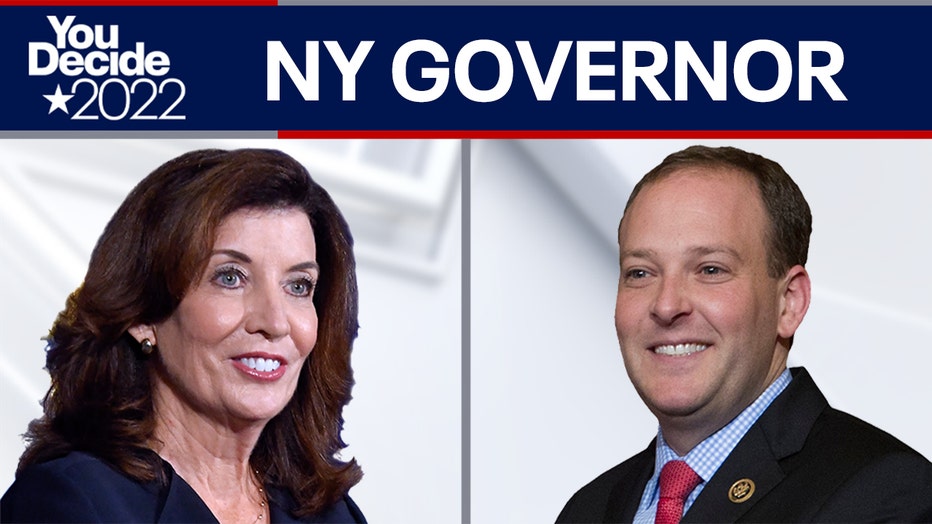 Zeldin jumped on these comments, pushing back on claims that he is fearmongering.

"Bill Clinton — during his speech — was mocking our focus on crime," Zeldin said to a crowd at a campaign stop. "This isn't funny. People are hitting their breaking point."

"He has been hyperventilating, trying to scare people for months and New Yorkers are on to it," Hochul said.

But New Yorkers will have the last word on Tuesday.

Zeldin said the first thing he is going to do if he wins is call Mayor Eric Adams.

"And I'm going to tell Mayor Adams that I want to work with him to find common ground wherever possible to be able to save the Big Apple," Zeldin said.

In addition to the governor's race, ballots in New York have the races for state attorney general, state comptroller, U.S. Congress, and the state Legislature.

The candidates for New York governor were out trying to give their message to voters as election day nears.