Hochul labeled Zeldin an "election denier" and "climate change denier" as she tried to link him to Trump, who enjoyed little support in New York.

"In Lee Zeldin's world, you overthrow the results of elections you don't agree with," Hochul said.

Zeldin voted against certifying the 2020 presidential election results in Arizona and Pennsylvania.

Trump's false claims of 2020 presidential election fraud transformed into marching orders that summoned supporters to Washington, D.C., and they then stormed the Capitol on Jan. 6, 2021, seeking to violently block Democrat Joe Biden's victory.

In Lee Zeldin's world, you overthrow the results of elections you don't agree with.

When asked by a debate moderator if he would vote against certifying the results again, Zeldin didn't directly say yes or no.

He instead said he wanted to focus on the future, and fight to institute voter ID laws to protect election integrity.

Hochul also asked Zeldin: "Is Donald Trump a great president? Yes or no?"

Zeldin praised Trump's record on policies from Israel to the U.S.-border policy to pandemic containment. 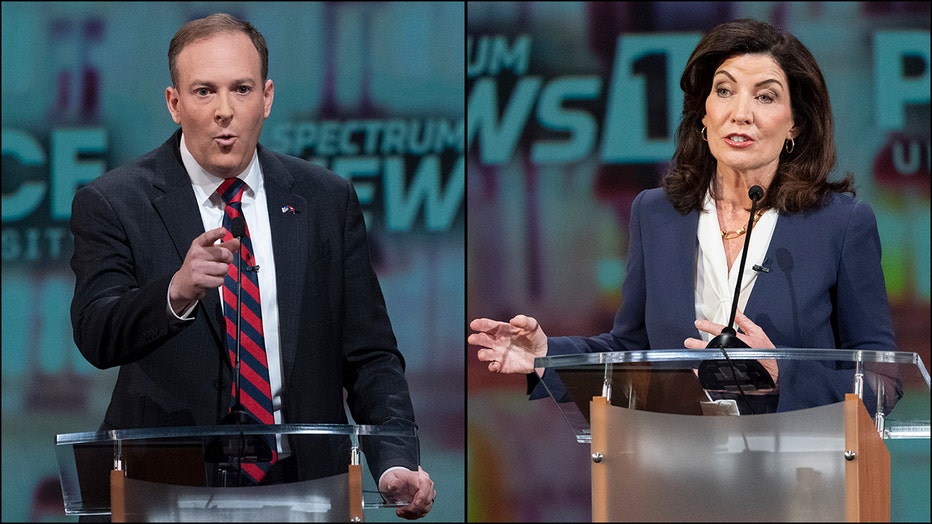 And when a moderator asked Zeldin if he would accept the results of the election if he lost, Zeldin said: "Well, first off, losing is not an option. Secondly, playing along with your hypothetical question, of course."

Hochul, the state's former lieutenant governor who took office after her predecessor resigned to avoid a likely impeachment, has enjoyed a strong lead over Zeldin in much of the polling this year.

But Zeldin remains a contender, enjoying support in wide swaths of upstate New York. Some recent polling suggests the gap between the candidates could be narrowing.

The Long Island Republican has spent much of the year railing against a streak of shootings and other violent crimes, including a series of unprovoked attacks on New York City subways. Two teenagers were also injured in a drive-by shooting outside his home earlier this month.

You're poorer and less safe because of Kathy Hochul and extreme policies. You deserve better.

Zeldin on Tuesday charged Hochul with failing to take seriously the concerns of New Yorkers about crimes on subways and hate crimes against Jewish and Asian-American communities.

He also argued that liberal opposition to natural gas extraction and new pipelines in New York is hurting the state's economy.

"You're poorer and less safe because of Kathy Hochul and extreme policies," Zeldin said, adding: "You deserve better."

New York was among the first states to scale back the use of cash bail for criminal defendants starting in 2020.

Both before and after the reforms, only a small fraction of the people released while awaiting trial — less than 1% — were re-arrested for violent felonies.

Hochul has noted that other cities and states without similar cash bail laws have seen spikes of crime since 2020.