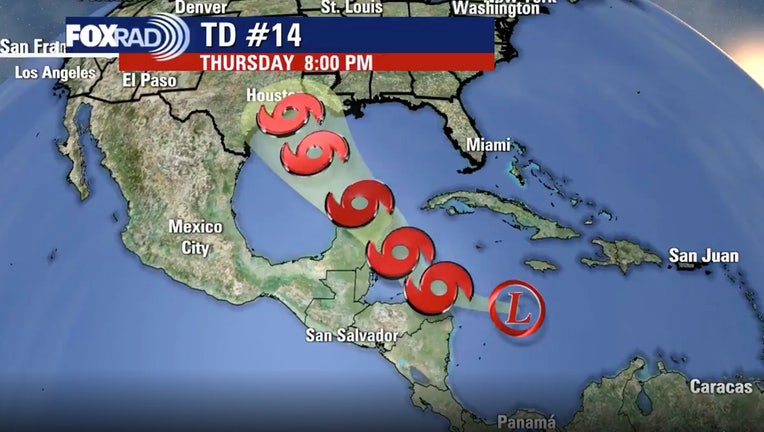 HOUSTON - Tropical Depression 14 has formed in the Caribbean and is expected to become a tropical storm as it moves across the Gulf.

As of now, Houston and Galveston are in the cone of uncertainty so it bears watching as we head into the weekend.

The Tropical Depression, which could be upgraded to a Tropical Storm Thursday night, is expected to strengthen over the northwestern Caribbean Sea through Saturday, and it could produce tropical-storm-force winds and heavy rainfall over portions of the coast of Honduras and the Bay Islands beginning tonight through Friday, according to the National Hurricane Center.

The system could be near or at hurricane strength when it reaches the Yucatan Peninsula of Mexico late Saturday, and watches could be required for a portion of that area later today.

The system is expected to move into the south-central Gulf of Mexico as a tropical storm on Sunday.

It's too soon to know how strong the storm will get as it moves over the Gulf of Mexico next week. However, it could reach the southeast Texas coast on or around the three-year mark of when Hurricane Harvey made landfall.