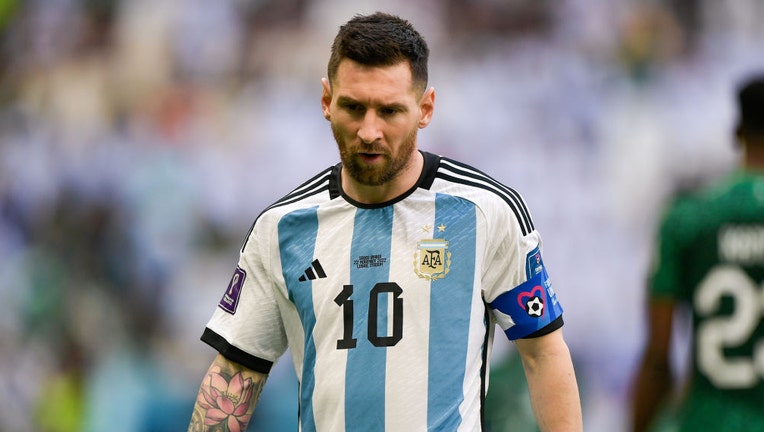 Lionel Messi of Argentinia looks on during the Group C - FIFA World Cup Qatar 2022 match between Argentina and Saudi Arabia at the Lusail Stadium on November 22, 2022 in Lusail City, Qatar (Photo by Pablo Morano/BSR Agency/Getty Images)

DOHA, Qatar - Saudi Arabia scored one of the biggest World Cup upsets ever by beating Lionel Messi’s Argentina 2-1 on Tuesday.

Messi’s quest to win the one major title to elude him got off to a shocking start and brought back memories of Cameroon’s 1-0 win over an Argentina team led by Diego Maradona in the opening game of the 1990 World Cup.

Goals by Saleh Alshehri and Salem Aldawsari in a five-minute span in the second half gave the Saudis the win. Argentina took an early lead with a 10th-minute penalty by Messi.

The Argentina loss rivals other World Cup upsets like Senegal's 1-0 win over titleholder France 1-0 in the 2002 tournament opener and the United States beating England by the same score in 1950.

A stunned Messi watched as scores of green-clad fans from Saudi Arabia, Qatar’s neighbor, celebrated in in disbelief in the stands. Saudi Arabia’s substitutes stormed the field.

Messi put Argentina ahead from the penalty spot after the video assistant referee told the referee to take a look at a jersey grab by Saud Abdulhamid on Argentina midfielder Leandro Paredes.

With Saudi Arabia’s first shot in goal, Saleh Alshehri found the bottom corner with an angled finish through the legs of defender Cristian Romero. 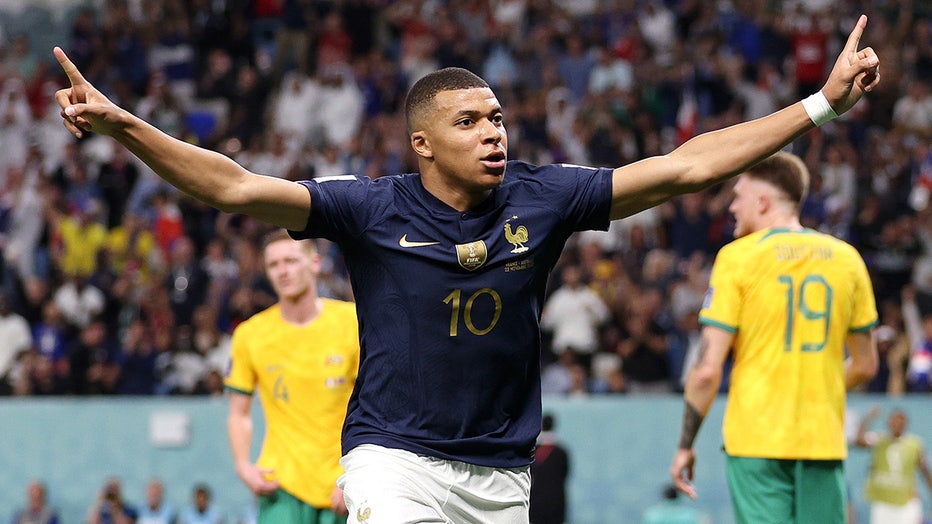 Kylian Mbappe of France celebrates after scoring their team's third goal past Harry Souttar of Australia during the FIFA World Cup Qatar 2022 Group D match between France and Australia at Al Janoub Stadium on November 22, 2022 in Al Wakrah, Qatar. (P

France showed it can cope without its star striker at the World Cup. Kylian Mbappe scored one and set up the second of Olivier Giroud’s two goals to help the defending champions beat Australia 4-1.

Giroud equaled Thierry Henry’s national record of 51 goals with a header from Mbappe’s cross. Mbappe headed in a cross moments earlier. He knelt with one hand behind his back and his finger on his forehead in a new celebration.

Craig Goodwin gave Australia the lead in the ninth minute. Adrien Rabiot equalized with a header in the 27th and set up Giroud’s first goal shortly after. 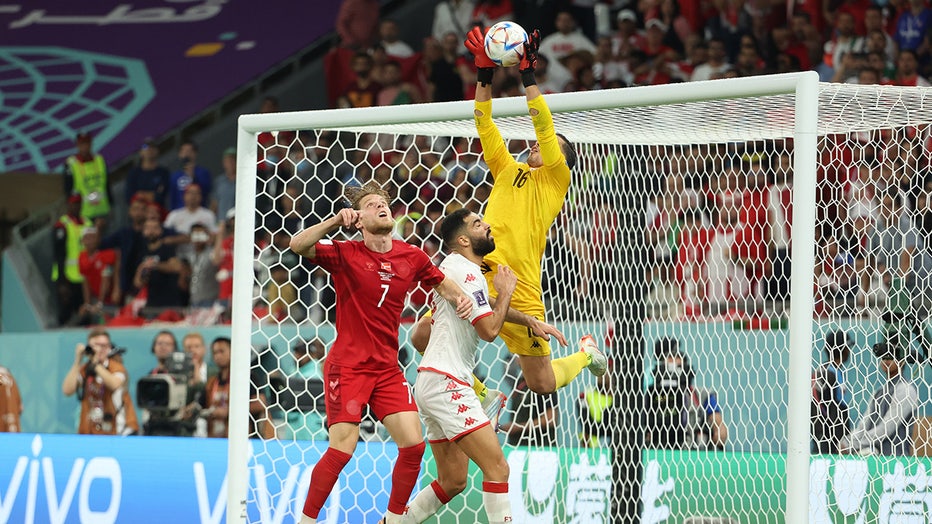 Tunisia goalkeeper Aymen Dahmen gathers a cross under pressure from Mathias Jensen of Denmark and Yassine Meriah of Tunisia during the FIFA World Cup Qatar 2022 Group D match between Denmark and Tunisia at Education City Stadium on November 22, 2022

Tunisia held European Championship semifinalist Denmark to a 0-0 draw at the World Cup. The result came three hours after Saudi Arabia beat Argentina in a shocking upset and before a stadium filled almost entirely with Tunisia supporters in another big result for Arab nations competing at the first World Cup in the Middle East.

An expert save shortly before halftime by goalkeeper Kasper Schmeichel helped Denmark preserve the draw. The match marked Christian Eriksen’s return to a major tournament less than a year and a half after his cardiac arrest at Euro 2020. 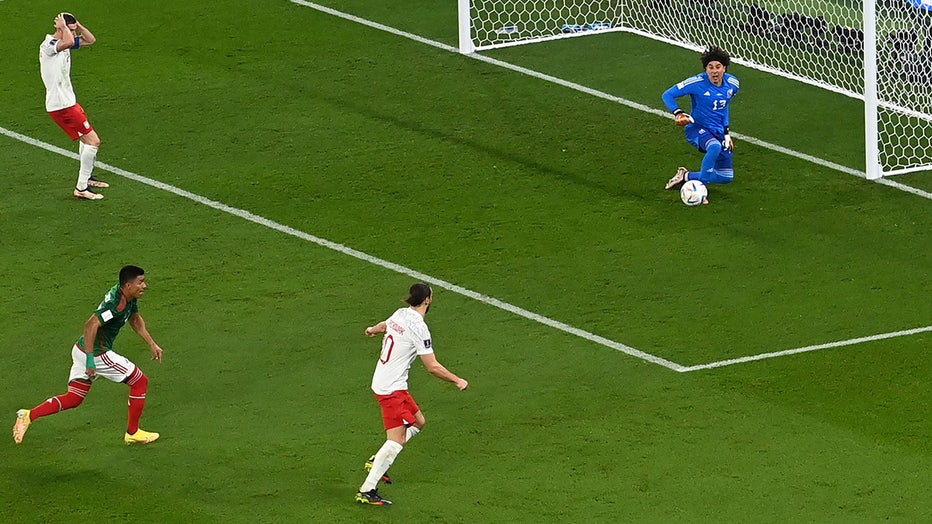 Robert Lewandowski’s second-half penalty attempt was saved by Mexico goalkeeper Guillermo Ochoa and left Poland to settle for a 0-0 draw at the World Cup. It was Lewandowski’s first penalty miss for the national team. Poland’s all-time leading scorer with 76 goals remains without a World Cup goal.

The Poland forward was awarded the penalty following a VAR review after Hector Moreno got hold of his shirt and pulled him down. Ochoa came up yelling in celebration after his stop. Mexico dominated possession but Poland goalkeeper Wojciech Szczesny turned away all three of El Tri’s shots on goal.

The first few days of the World Cup have been been marred by logistical snags, the latest on Monday when fans complained their tickets to the England-Iran match had vanished from their mobile FIFA application.

Long lines grew outside the Khalifa International Stadium about an hour before kickoff with fans furious they might not get inside.

The night before, the official fan zone quickly became overcrowded during the opening match between host nation Qatar and Ecuador. Tens of thousands of fans pushed and shoved against police lines to enter the venue, one of the few places where fans could purchase beer and watch the game.

lphonso Davies will make his World Cup debut in a boost for Canada, which returns to soccer's biggest stage for the first time since 1986.

The winger is easily Canada's top player but his status for the tournament was in doubt after he strained his right hamstring playing for Bayern Munich earlier this month. Davies was given the go-ahead to play Wednesday when Canada faces second-ranked Belgium.

"He’s clear that he wanted to play," Canada coach John Herdman said. "I think our medical team, we wanted him to play, as well. But you’ve just got to go through the mathematical algorithms that are put in front of you to progress him to top speed and he hit that, so that was brilliant. He’s been in full training and he’s got that big smile back on his face, which is great."

The 22-year-old Davies has 12 goals in 34 international appearances, including five goals in World Cup qualifying, and will be needed as Canada faces Belgium, a 2018 semifinalist and second in the FIFA rankings.

It is Canada’s second ever appearance at the World Cup, and it's first trip to the tournament since a hapless three-loss performance 36 years ago.