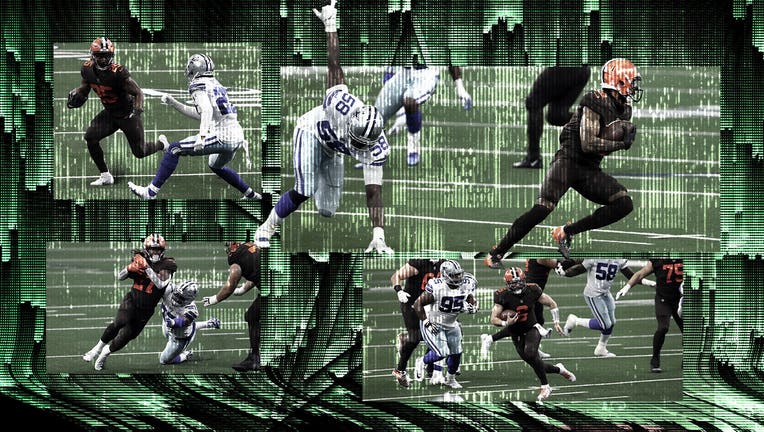 Here are the biggest NFL betting lessons of the week. (FOX)

LOS ANGELES - Y’all, we are already one-quarter of the way through the NFL season! Time flies when you're watching football.

After a hectic Sunday of action in Week 4, what did I learn? Here are the biggest lessons of the week, with an eye on how to approach gambling moving forward (all odds via FOX Bet).

Points. Lots of them.

The Cowboys are a train wreck through the first month of the season and a Falcons brain fart away from being 0-4. As you can see by the scores, their defense is pathetic, and that might be too nice of a description.

Sunday, Dallas allowed Cleveland to run for 307 yards and pass for another 200, averaging seven yards per play. The Browns scored on two trick plays, both of which ended with Odell Beckham in the end zone, and even scored two points when the Cowboys blocked an extra point, tried to scoop up the loose ball, and fumbled, only for the Browns to recover eventually in the end zone.

And for those believing this can’t be them – "The Cowboys defense has just started slow!" – I’m here to tell you this is what they are.

Their defense is run by Mike Nolan, who last ran a defense way back in 2014. That season, his Falcons squad finished 31st in DVOA. The year before that, the Falcons defense finished 26th in DVOA. And currently, the Cowboys are near the bottom in defensive DVOA.

Why? Nolan’s defense is too complicated. Too many moving parts. Sometimes, simple is best. Simple has players moving faster, quicker and with more confidence.

Unfortunately, Cowboys coach Mike McCarthy doesn’t believe that, and until I see differently, I won’t believe in this defense.

Now, the bright spot for the Cowboys has been Dak Prescott, who threw for more than 500 yards Sunday. Yes, the Cowboys lost, so plenty will feel these are empty yards. However, it's hard to blame Dak when his skill position players won’t stop fumbling.

The Cowboys offensive line was the best in the NFL for years, but not anymore. That unit is beat up and shuffling players around, but Dak stays fighting in the pocket for a chance to target one of his excellent trio of receiving options.

And with the Cowboys offense always fighting uphill, Dak and the offense will continue to put up numbers.

When you combine a defense allowing 36.5 points per game with no help in sight, plus a quarterback who has thrown for an NFL record 1,690 yards through four games, a Cowboys game figures to continue to hit the over.

In Week 5, the Cowboys take on the Giants, and so far, that number is 54.5, according to FOX Bet.

Justin Herbert has entered the chat

The Chargers started the season with Tyrod Taylor guiding the offense. The plan was to be a run based attack, take some shots wth Taylor and rely on the defense.

However, Taylor has missed the past three games with a punctured lung, and his replacement, the sixth pick in the 2020 draft, Justin Herbert, has taken over.

I went to Oregon, and I studied all the snaps Herbert took while wearing a forest green, midnight green, light green, yellow, white, grey and black Ducks uniform. I believed he could be successful in the NFL if given the right tools and a coach who believed in him.

He’s proving me right so far. The Chargers rookie QB has started three NFL games now, with the team losing all three but going 1-1-1 against the spread.

It’s time to recognize this Chargers offense is dynamic with Herbert running the show. He has improved each week and matched throw for throw with Tom Brady on Sunday.

In fact, Herbert is now 10th in the advanced stat completion percentage over expectations + expected points added. Sounds like a mouthful, but I promise it’s an outstanding measurement for quarterback success.

So what does this mean for the Chargers each week? It means they should keep games close and have a much better chance to light up the scoreboard. If they are behind in a game, they have an offense that can lead them back. Live betting the Chargers getting points would be ideal.

Are the Bills the second-best team in the AFC?

I was a Josh Allen skeptic. There’s almost no historical comparison to his improvement between his first two seasons of below-average-replacement play and his first month of the season. None. And if you pretend you knew this would happen, you’re lying.

But nonetheless, the Bills quarterback has the team rolling. Credit offensive coordinator Brian Daboll, who has designed an offense that fits what Allen does best. The Bills have built up their offensive line and receiving corps, and it has paid off. The normally reliable Bills defense has been a touch below that this season, but it’s still early.

And it’s still early to declare the Bills the second-best team in the AFC.

I’m out on the Ravens winning the AFC, only because I don’t trust them to beat the Chiefs. But the numbers, and the eye test, still show the Ravens are slightly better than the Bills.

Baltimore has a higher DVOA and, unlike the Bills, has dominated the poor teams on the schedule. The Ravens beat the 3-1 Browns 38-6, beat the Texans by 16 and despite a late touchdown by the Washington Football Team, that final margin was 14.

The Bills are 4-0, yes, but they’ve played closer games against worse teams, beating the Jets by 10, Dolphins by three, Rams by three and Raiders by seven. A win is a win, and you take them anyway you can, so I’m not taking anything away from the Bills. The Ravens are still just a class ahead of them.

I’d have liked to evaluate the Steelers in Tennessee this weekend, but with the game postponed for a few weeks, the Bills have moved into the third-best slot in the AFC.

The Patriots are set up for failure

Quarterback Cam Newton tested positive for COVID-19 on Saturday, right as the Patriots were set to leave for the Kansas City. Their travel plans were put on hold until further tests could be conducted and players cleared for COVID exposure. After all the testing came back negative, the game was rescheduled for Monday night.

The show must go on, but the Patriots have no chance tonight.

Set aside the Patriots playing with Brian Hoyer, who won’t scare the Chiefs at all. Newton is a complete quarterback in that you must prepare for everything – his arm and his leg. The Patriots offense incorporates both, and teams have to spend extra time preparing for Newton. All the plays that feature Newton are erased from the playbook with Hoyer starting.

My biggest concern here revolves around the Patriots' travel schedule. The Pats are traveling day of game to Kansas City, which is rare, and I can’t imagine it has happened in recent memory. How do you feel after taking a flight? Feel ready to workout? How about a workout where someone else is attempting to physically pound on you? Correct. You’re not.

And neither will the players. Flights dehydrate and inflame the body. When you travel the day before a game, you have time to hydrate and decompress the body before playing. On Monday night, the Patriots won’t have that opportunity. Their bodies won’t be fresh.

Also, it was announced the Patriots took two separate planes to Kansas City. One plane held 20 players who are part of contact tracing from Newton. The other plane is the rest of the team. So that got me thinking. If you’re contract tracing, all the quarterbacks would be on that plane. What if a few players test positive in that group? All 20 players should be out.

So who will be playing quarterback for the Patriots? Do they have a practice squad player who might have avoided being near Cam for an extended time? The Chiefs are laying a big number but that’s the play this week. Patrick Mahomes and the Chiefs have won 11 straight games since their 2019 bye, including the playoff run, and have won nine of those 11 by double digits.