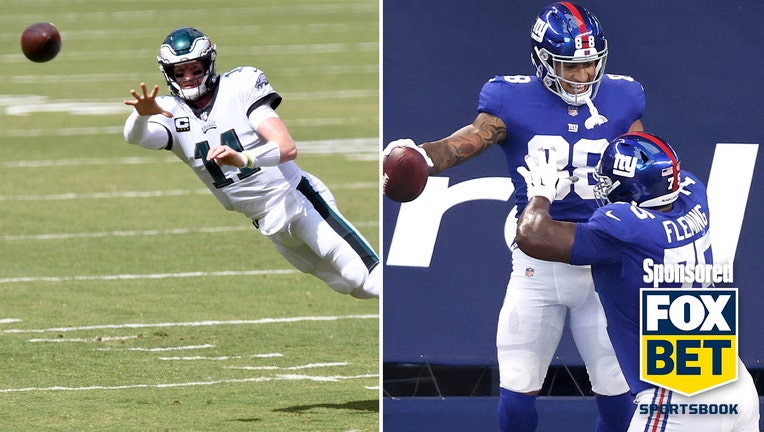 LEFT: Carson Wentz #11 of the Philadelphia Eagles throws a pass in the first quarter against the Washington Football Team at FedExField on September 13, 2020 in Landover, Maryland. (Photo by Greg Fiume/Getty Images) RIGHT: Evan Engram #88 of the New

They are separated by 90 miles at opposite ends of the New Jersey Turnpike. However, in the crowded NFC East race, the Philadelphia Eagles and New York Giants are stuck in the middle of a traffic jam that would rival anything seen on that roadway.

And so, a little breathing room is on the line in South Philadelphia on Thursday Night Football when the 1-5 Giants, led by quarterback Daniel Jones, travel to Lincoln Financial Field to face Carson Wentz and the 1-4-1 Eagles.

Kickoff is set for 8:15 p.m. on FOX and NFL Network. And you can place a wager on the action with a bet on FOXBet.com – the best place to find the latest odds, prop bets and bet boosts. Check it out now for special promotions when you open an account. FOX Bet is available in Pennsylvania, New Jersey and Colorado through the FOX Bet app and online at FOXBet.com.

These lines could bounce, however, given the injury status to the Eagles, who are expected to be without both RB Miles Sanders (knee) and TE Zach Ertz (ankle) for this week’s game along with several injuries along the offensive line in front of Wentz.

Philadelphia has won seven straight games in the series dating back to the 2016 season. Overall, the Eagles hold an 88-86-2 mark against the Giants. Wentz is 6-1 against the Giants as a starting quarterback and has won his last six straight against New York, throwing for nine touchdowns and just three interceptions. Eagles head coach Doug Pederson is also 5-0 on Thursday night games as a head coach.

This is only the second time that Jones has faced the Eagles - dropping the season finale last year at the Meadowlands. This will be Giants head coach Joe Judge’s first game against the Eagles. Judge is a graduate of Lansdale Catholic High School in nearby Lansdale, PA - a 50-minute drive to Lincoln Financial Field.

While both teams are struggling to record wins, there have been positive signs over the last few weeks on offense for both. The Eagles have received three straight solid performances from Carson Wentz, including a gutty one in Sunday’s 30-28 loss to Baltimore. Philadelphia has also found a receiving threat in Travis Fulgham, who has touchdown receptions in the past three games. This has helped reshape what has been an injury-riddled offense.

In fact, you could bet on that Eagles offense to get retooled and score points. One of the BetBoost wagers on FOX Bet for Thursday night’s game has Fulgham, Greg Ward and backup tight end Richard Rogers all scoring touchdowns. All three were on the bench before injuries decimated Philadelphia’s receiving core. The bet boost number on that is +1900 – meaning a $100 bet could pay $2000. Play online at FOXBet.com.

For New York, there are a few options to keep in mind when it comes to the offense. For starters, DeVonte Freeman had almost signed with the Eagles before heading to New York for a bigger role when Saquon Barkley got hurt. Freeman is a +125 to score a touchdown in Thursday night’s game at FOXBet.com.  Keep an eye on Evan Engram, the tight end who is a favorite target of Jones in the Red Zone. Engram is a +187 to score on Thursday night.

It is one of the biggest games of the year in the NFC East and FOXBet.com is the place you should go to get all the latest odds and prop bets to help you make your selection. Sign up today.