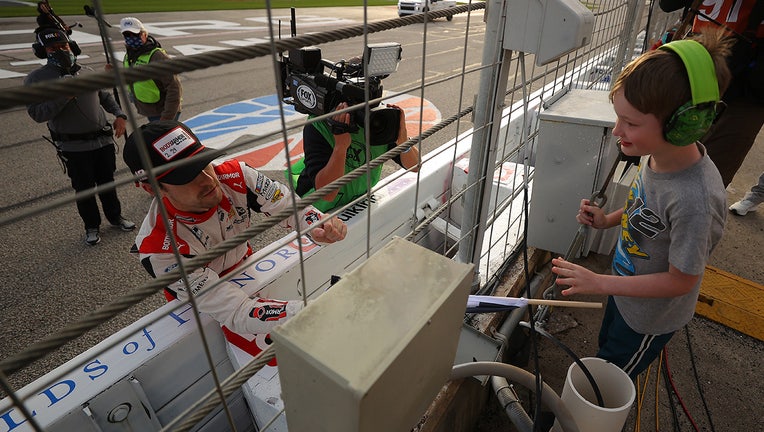 Ryan Blaney, driver of the #12 BodyArmor Ford, hands the Sunoco flag to a young NASCAR fan after winning the NASCAR Cup Series Folds of Honor QuikTrip 500 at Atlanta Motor Speedway on March 21, 2021 in Hampton, Georgia. (Photo by Kevin C. Cox/Getty I

Ryan Blaney put in a hard day's work to earn the checkered flag at the Folds of Honor QuikTrip 500 NASCAR Cup Series race on Sunday, but wasted no time giving it away.

The Team Penske driver took the lead from Kyle Larson with nine laps to go and held him off to score his fifth career Cup Series win and first of the 2021 season.

Blaney parked his car at the finish line and walked over to the catch fence to grab the flag, then called over a young boy wearing a T-shirt with him on it, gave him a fist-bump and slipped the flag through the fence.

The boy hesitated before accepting it and walking back to his family with the gift.

Blaney became the sixth different winner in six races to start the season as Larson slowed on worn tires after leading 269 of 325 laps.

LINK: Get updates on this story from FOX News