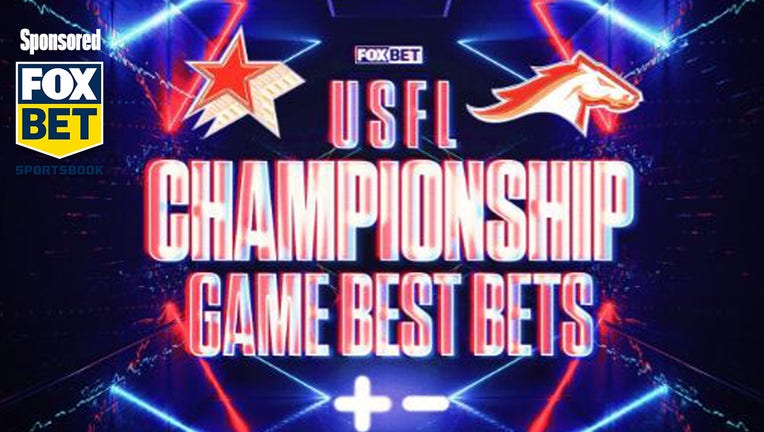 FOX Sports analyst Geoff Schwartz gives his pick for the USFL Championship game between the Philadelphia Stars and the Birmingham Stallions. (FOX Sports)

Bring on the USFL Championship Game!

The title game will air live on FOX at 7:30 p.m. ET on Sunday from Tom Benson Hall of Fame Stadium in Canton, Ohio.

This game features the Birmingham Stallions and the Philadelphia Stars. The Stallions have been one of the best and most consistent squads in the league, and the Stars are a team that has held its own from one week to the next. Both of these squads have played some of the best football in this inaugural year of the USFL, and I expect nothing less from them on championship weekend.

It's been a blast betting on these games all season, so let's do it again one more time. Here are my best bets for this championship matchup, with all odds via FOX Bet.

Not that any wager seems easy, but Birmingham is the better team on paper. The Stallions have a plus-79 point differential in their 11 games this season, including a 31-17 win last weekend against the Breakers in the semifinals. Birmingham also averages more yards passing and rushing on offense than Philadelphia.

On offense, the Stallions are led by quarterback J’Mar Smith, who has thrown for 1,763 yards and 11 touchdowns this season. They've got a two-headed rushing attack with CJ Marable and Bo Scarbrough. Marable started the season carrying the bulk of the load until Birmingham added Scarbrough, who’s averaging 14 carries a game, into the lineup.

One key going into this game is Philadelphia's defense allowed the second-most points in the league during the regular season. This was mainly due to the team's rush defense struggling. The Stars allowed more than 150 rushing yards per game, and I just can’t back a team that can’t stop the run — especially in the title game.

Philly's offense is led by Case Cookus. He has thrown for 1,467 yards and 12 touchdowns in his 11 starts this season. The Stars' rushing attack averages 5.1 yards per attempt which ranks first in the league, but they only rush the ball an average of 20 times a game. On the other side of the ball is the stout Stallions' defense. Let's take a look at some of Birmingham's defensive metrics.

The Birmingham D is led by linebacker DeMarquis Gates. This year, Gates has racked up 6.5 sacks and 67 total tackles — 12 of those tackles were for a loss. The Stallions allow the least amount of yards per game, and their 27 sacks lead the league. Also, Birmingham has not allowed more than 17 points since Week 2! They are a well-rounded team. Look for the Stallions' defense to control this game and limit Philadelphia's time of possession.

The one aspect of the game where the Stars have the advantage is turnovers. As you know, turnovers are typically hard to predict. However, the Stars have forced 22 turnovers this year. Defensive back Channing Stribling has led this effort with seven interceptions, the most in the league. If the Stars are going to win, they need to force turnovers because the team has a fumbling issue. Philadelphia's ball carriers have lost seven fumbles.

The Stallions, on the other hand, have not forced as many turnovers as the Stars, but they’ve only turned it over eight times in 11 games. That’s outstanding ball security and those little things are extremely important in title games.

The play for me is to take Birmingham straight up on the moneyline. I'm confident that the Stallions will win this game as they've been the best team all season long.

The line for this matchup opened at Stallions -3.5 but has now ballooned out to 4.5, which is a dead number. If you want to lay the points, I envision some money coming in on the Stars closer to kickoff to bring this number back down.