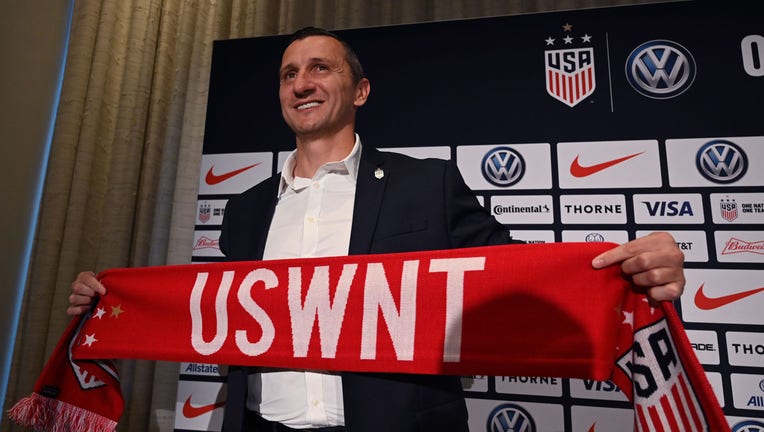 Vlatko Andonovski poses for photographers after a press conference where it was announced as the new US Soccer Womens National Team head coach on October 28, 2019 at Kimpton Hotel Eventi in New York City. - Andonovski 43, comes to U.S. Soccer after s

A person with knowledge of the deal said Andonovski, the current coach of the Reign FC in the National Women's Soccer League, is expected to sign a contract with U.S. Soccer in the coming days. The person spoke Friday to The Associated Press on the condition of anonymity because the appointment had not been formally announced.

Andonovski, 43, was considered the front-runner for the job after Utah Royals coach Laura Harvey and North Carolina coach Paul Riley removed their names from consideration.

Andonovski replaces Jill Ellis, who led the U.S. team to back-to-back World Cup titles during her tenure as coach.

Andonovski has been a head coach in the NWSL for the past seven seasons.

He was coach of now-defunct FC Kansas City from the league's inception in 2013 until the club folded in 2017. He won two league titles with the team.
Andonovski was named head coach of the Reign in late 2017 when Harvey went to Utah.

The Reign weathered a number of injuries this season and the absences of several players during the World Cup to make the playoffs for the second straight season. The Reign fell 4-1 to the North Carolina Courage last Sunday in the league semifinals. This season's championship match between the Courage and the Chicago Red Stars is set for Sunday in Cary, North Carolina.
Andonovski, a native of Skopje, Macedonia, played for several teams in Europe before embarking on a professional indoor soccer career in the United States.

Among his first duties with the U.S. team will be preparing it for qualification for the 2020 Olympics in Tokyo. The United States has two more exhibition matches set for this year, against Sweden in Columbus, Ohio, on Nov. 7 and against Costa Rica in Jacksonville, Florida, on Nov. 10.
Ellis was named coach of the team in 2014 and led the U.S. to eight overall tournament titles, including victories at the World Cup in 2015 and earlier this year. Over the course of her tenure, the United States lost just seven matches.

Ellis announced her decision to step down just a little more than three weeks after the United States beat the Netherlands in Lyon, France, for the World Cup title. It was the team's fourth overall championship in soccer's premier tournament.

Her last match came earlier this month when the team capped a five-game victory tour with a 1-1 draw with South Korea in Chicago.