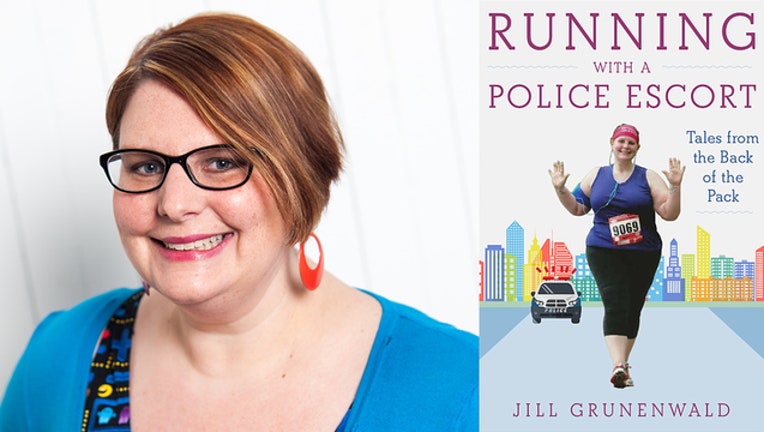 NEW YORK - A few years ago, Jill Grunenwald, a librarian from Cleveland, attended a storytelling event in town where a friend posed the question: "What would you do if you knew you could not fail?" She took that as a direct challenge and set out to write and publish a memoir.

Grunenwald, who holds a BFA in creative writing, was already a writer and published author, so a memoir made sense. So what would she focus on?

Well, she had a blog called The Year of the Phoenix that chronicled her serious but humorous ups and downs with fitness and health. As someone who wasn't athletic as a kid and had dealt with disordered eating, she'd already written a considerable amount about being the happiest and healthiest version of herself she could be—and how that was tied into being a runner.

Like, so slow that she sometimes finished races in what runners profanely call DFL (Google it).

That angle of the blog had already become a podcast, so Grunenwald knew she had an audience for her stories. It was just a question of turning them into the narrative that became Running with a Police Escort: Tales from the Back of the Pack (Skyhorse, 2017).

I follow Grunenwald, 35, on social media and have even been a guest on her podcast. So I knew I needed to read the book and then interview her about it. Why?

Because I'd once come in DFL, too.

This is our chat, edited for length and clarity.

The title of your book is a reference to being a back-of-the-pack runner. Can you explain why and how that ties into the mission of the book?

GRUNENWALD: When you're running on main roads in cities [in a race], there's a police car that follows the race to keep the people at the back safe. And I had come in last place multiple times at races. But one in particular I had looked over my shoulder and there's a police car right behind me the whole race. As I'm running, there's nobody else out there—it's a Sunday morning in Cleveland, everyone's still asleep. But there are also police officers standing along the route. And one of the officers standing there gestured at me and goes, "You must be a very important person to have a police escort." And that was a mental shift [for me]—not just the fact that I'm in last place in a race but there is a police escort and not many people get to be that role. I'm the last person, I'm bringing it home.

So part of my mission in putting that positive spin on it and talking about what it's like to be a slow runner. With running, everyone gets so focused on speed. You want to be a fast runner, you want to come in first place. You want to be those people at the front of the pack. But there are those of us who we can't do that for whatever reason. But that doesn't make us any less of a runner or any less dedicated to the sport. I am never going to be running the Boston Marathon but I still love watching it. The mission was showing the other side of running and racing.

The title of your book is very clever in part because it's a perfect illustration of what it means to be in the back of the pack. In a way, it thematically ties you to the front of the pack because in big races the elite runners have a police escort as well. So it's like, "Well, they get a police escort. But so do I."

What kind of reception have you had so far from the book?

GRUNENWALD: So far it's been very positive. I've gotten a lot of emails from runners of all abilities. It has resonated with them; they're seeing themselves in the book. They have had very similar experiences with being in the back of the pack or being in last place.

In the book, you talk about growing up and not really being into running or athletics. You have this hilarious line in the book where after you mention you were in the marching band you wrote: "Of course I was"—like it's obvious that you were a marching-band kid in school and not a runner.

GRUNENWALD: I lettered in marching band, I lettered in drama, and I would have lettered in choir except I started a year too late. So, yeah, I was that kid. I hated running. I hated gym class. It was the worst. I walked The Mile every single year. Year after year. Sometimes a gym teacher could con me and convince me to like run part of it—like run the straight part and walk the curb. I would do that for a lap and then start walking again. I was in my 30s before I discovered running.

GRUNENWALD: All of the above. I always have to check [the maximum] course times for races. Other people can just sign up for races and not really have to think about that. It can be lonely sometimes in the back of the pack. If people are doing their own thing I'm OK with that. Running is my alone time so I'm perfectly fine with that. But for other people who like running with other people it may be challenging to be back there when there's nobody else around you for a quarter of a mile or so. I have always gotten my finisher's medal. Not everyone has. I've heard stories from people [about races] that run out of medals. I've finished races and there's no food, there's no water. They've all packed everything up. The finish line is still there but that's kind of all that's there. I don't think it's intentional but I think sometimes support from racing organizations is a little bit lacking when it comes to those in the back of the pack. They can't stick around forever, so they have to have a cut-off point at some time. So for new people who aren't used to that it might be a little disheartening. I've gotten to the point where I'm "Eh, it is what it is."

Do faster runners and others not understand certain things about slow runners? And if so, do you hope the book might shed some light on that?

GRUNENWALD: Sometimes people think that if you are a slow runner, if you come in last place, that you are new to the sport and this might be your first time running. And that's not the case at all. I've done three half-marathons, multiple 5Ks and 10Ks. I just happen to be a slow runner. So I'm not new to the sport. This is just what my speed is and I've just accepted that. I'm not trying to get faster necessarily. I just want people to understand that those of us in the back who are slow are perfectly OK with that and we're just happy to be out there running with everybody else, regardless of where we finish in line.

What goals do you set for yourself?

GRUNENWALD: My goal is pretty much to do at least as well as or better than I did on my last race of that same distance so I've set PR [personal record] goals but that's mostly just personal goals for myself right now. I do need to look outside of my comfort zone to find new goals because the PR goals are great but they only get you so far.

What advice would you give someone who is just starting out as a runner?

GRUNENWALD: You know what? If you want to run, just go out there and run and just have fun with it.

Arun Kristian Das is a producer for Fox5NY.com and related social media platforms. On November 5, 2017, he will run his second New York City Marathon. He won't be last, but he sure as heck will finish after sundown.