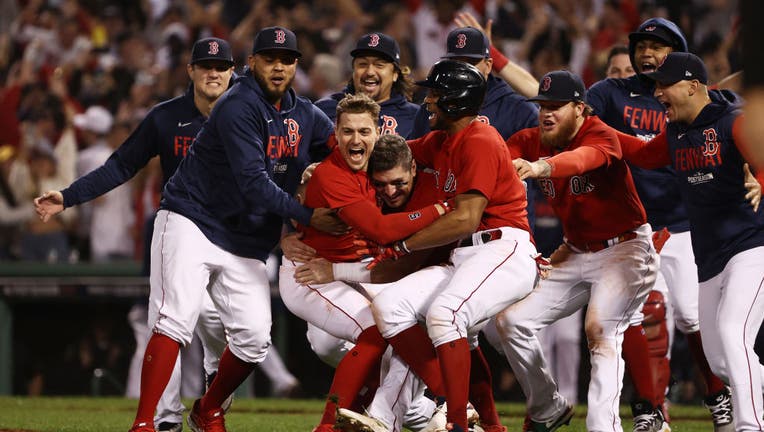 BOSTON, MASSACHUSETTS - OCTOBER 11: Enrique Hernandez #5 of the Boston Red Sox celebrates his game winning sacrifice fly with teammates in the ninth inning against the Tampa Bay Rays during Game 4 of the American League Division Series at Fenway Park

BOSTON (AP) - Kike Hernandez delivered Boston's second straight walk-off win, scoring pinch-runner Danny Santana with a sacrifice fly in the ninth inning to send the Red Sox to the AL Championship Series with a 6-5 win over the Tampa Bay Rays on Monday night.

After winning Game 3 of their best-of-five AL Division Series on Sunday with Christian Vazquez's two-run homer in the 13th, Boston took Game 4 for its first set of consecutive walk-off postseason wins since 2004 ALCS Games 4 and 5, both courtesy of David Ortiz against the Yankees.

Rafael Devers had a three-run home run off rookie Shane McClanahan to ignite a five-run third inning that put Boston in front 5-0. Tampa Bay battled back and tied it in the eighth.

The wild-card Red Sox will await the winner of the other ALDS matchup between the Houston Astros and Chicago White Sox. Houston leads 2-1 going into Game 4 in Chicago on Tuesday, a makeup of Monday's rainout.

"Since day one, you guys believed in this group," manager Alex Cora told his players before setting off a bubbly clubhouse celebration. "Not too many people believed outside this frigging clubhouse, but here we are: ALCS! On to the next one!"

Boston improved to 15-3 in potential clinching postseason games and have won each of their last eight. It brings an abrupt end to the season for the Rays, who'd been eyeing back-to-back trips to the World Series after winning 100 games during the regular season and rolling to the AL East title.

"There's no doubt there's disappointment," Tampa Bay manager Kevin Cash said. "We had high aspirations to get deep into this thing. We ran into a Red Sox team that they just beat us -- no other way around it. They got the big hits."

Vazquez led off the ninth with a single through the hole to left field and moved to second on a sacrifice bunt by Christian Arroyo. Travis Shaw then hit a bouncing ground ball to third that went for an infield single when Yandy Diaz bounced his difficult throw to first baseman Ji-Man Choi. Vazquez got to third and Santana entered to run for him.

Hernandez, who was 9 for 20 in the series, scored Santana with a fly ball to left.

"All I got to do is bring in the run from third," Hernandez said. "And having Danny at third instead of Vazqy eased my mind a little bit."

Rays postseason star Randy Arozarena ripped a tying single with no outs in the eighth inning of Ryan Brasier and advanced to second on the throw. Garrett Whitlock relieved and got through the eighth without further damage, then pitched a scoreless ninth for the victory.

Red Sox starter Eduardo Rodriguez allowed two runs and three hits with six strikeouts over five innings, plus one batter. It was redemption after he lasted just 1 2/3 innings and gave up two runs in Boston's 5-1 loss in Game 1.

Devers finished with three hits. Wander Franco had a two-run homer for the Rays.

With the game knotted at 5 in the eighth, Alex Verdugo grounded to shortstop Franco, who threw the ball into wildly in the Red Sox dugout, allowing Verdugo to advance to second. With one out, Hunter Renfroe flied to center and Verdugo tried to tag, but he was thrown out at third by Kevin Kiermaier.

The Red Sox led 5-0 after three innings but Tampa pulled within 5-3 on Austin Meadows' RBI single in the fifth and Franco's two-run homer in the sixth off Tanner Houck.

Boston's Josh Taylor pitched a scoreless seventh and handed it off to Braiser.

But Braiser promptly gave up back-to-back doubles to Mike Zunino and Kiermaier that made it 5-4. That was followed by a single by Arozarena to tie it up.

Braiser exited in favor of Whitlock. He was able to work out of the jam, getting Franco to fly out, followed by groundouts by Brandon Lowe and Nelson Cruz.

After being solid on the mound throughout 2021 and in a Game 1 win, Tampa Bay's pitching struggled over the last three games, with the Red Sox outscoring the Rays 26-15.

Right-hander Collin McHugh served as the opener Monday and pitched two scoreless innings, allowing one hit before handing the ball off to Game 1 starter Shane McClanahan.

The rookie was pitching on three days' rest and coming off a strong performance in the series opener in which he picked up the victory after pitching five scoreless innings.

Boston had his number this time around.

McClanahan quickly gave up a single Vazquez and walked Kyle Schwarber. He seemed on his way to getting out of trouble after he got Hernandez to fly out for the second out of the inning.

But Devers jumped all over a first-pitch fastball and launched a line drive into the first row of the center field bleachers for a home run.

Xander Bogaerts came up next and singled. That was followed by Verdugo's double off the Green Monster that scored Bogaerts. J.D. Martinez kept it going with a single off the Monster that brought Verdugo in to make it 5-0.

"Down 5-0 nothing in the third inning, that was pretty devastating," Cash said. "We claw back in it and we came up short tonight"

McClanahan was pulled after that in favor of J.T. Chargois.

Following a double by Renfroe, Chargois finally got the Rays got out of inning, striking out Vazquez.

Red Sox: Manager Alex Cora said reliever Hansel Robles, who gave up a solo home run to Franco and game-tying double in Game 3, remained under the weather ahead of Monday's game.

According to STATS, Rodriguez is the second pitcher to last less than two innings in a postseason start, then pitching five or more innings with three or fewer hits in his next start that same postseason. The other was Don Larsen, who lasted 1 2/3 in Game 2 of the 1956 World Series before his Game 5 perfect game.

Meadows made Rodriguez work for the first out of the third inning. The at-bat lasted 17 pitches and included 10 straight foul balls before Rodriguez struck him out with a slider.

The 17-pitch battle is the longest by pitches in a postseason plate appearance since at least 1988, when pitch count data started being tracked.

Boston will hit the road for the ALCS opener Friday night.